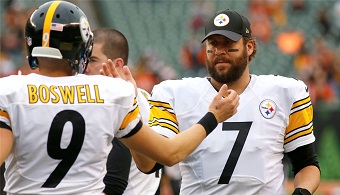 Steelers quarterback Ben Roethlisberger says he is still supports Chris Boswell as the kicker’s struggles continued Sunday in the team’s loss to the Oakland Raiders.

Roethlisberger adds the Boswell needs to have the same confidence that he and the rest of the Steelers do.

“I just kind of put my hand on his back and said, ‘Hey, keep your head up. We’re going to need you at some point’ and hopefully he heard the words,” said Roethlisberger. “I haven’t lost confidence in him. I still think every time he lines up it’s going to go in. He needs to have that same confidence and I hope he does.”


You can listen to Ben’s full show here.