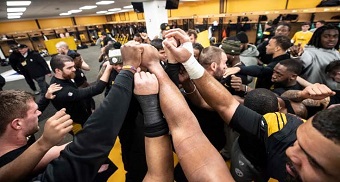 During his radio show on The Fan Tuesday, Steelers quarterback Ben Roethlisberger says Sunday’s victory against the New England Patriots was the definition of a complete team win.

“It just felt like everybody contributed. It might not have been a spectacular day on anybody’s front but it was a pretty good offensive day. It sounds crazy because he didn’t score all the points we wanted to score and things like that but, just guys making plays,” said Roethlisberger.

Running back Jaylen Samuels had a big day filling in for the injured James Conner with 142 rushing yards on 19 carries. Roethlisberger says other than not picking up on a blitz that lead to a sack during the second drive, the rookie had a great day.

“After that (sack) I thought (he) did do some good things, picking up the blitz . . . and so the way that he played really I think will help his confidence and help him to continue to grow and we can continue to use him, that’s fun to see.”

Receiver James Washington, who Ben singled out a few weeks ago, had his biggest game so far this season with three catches for 65 yards.

“I thought that James made some huge plays for us. The one down the sideline tracking the ball, going up, high-pointing it, thought that was great. Then he had a catch and (broke) a tackle (for a) run. He starting to play with confidence and when I said that to him a few weeks ago, ‘get your confidence back’, he’s showing that,” said Roethlisberger.

Roethlisberger was criticized for his strong criticism of Washington after the team’s loss to Denver but Ben says he knew Washington would use it to improve.

Before the game even started Roethlisberger says that they decided there weren’t going to be any individual player introductions and that he and center Maurkice Pouncey decided they wanted the team to come out together.

“Pouncey and I had a talk earlier in the week, and I went to Coach T, and said, ‘Hey, do you have any ideas of who you’re going to introduce?’ He kind of gave me a look like, ‘I’m going to do the offense.’ I said, ‘okay, well Pouncey and I have talked, and we said instead of introducing the offense we would like you to introduce the team.’ And he said, ‘OK.’ He kind of gave me a look like, ‘okay, sounds good,’ and that was the end of it. So that’s what we did.” 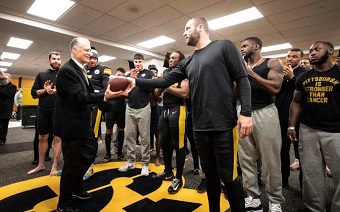 Roethlisberger also admitted that beating the Patriots is always a little more special, especially when it’s at home.

“Any time a team beats you way more than you beat them, you definitely want to go get them. Yeah, it means something. They’re the team that everyone wants to beat all the time. When you beat them it makes you feel a little bit more special.”

Asked about the report from Ian Rapoport of NFL Network that he had suffered cracked ribs, Roethlisberger said he doesn’t know where that came from and criticized Rapoport’s reporting.

“You shouldn’t even say his name on this show because nothing of what he says there is any truth to. I have no idea where that came from. My wife texted me before the game like, ‘Did you hear about this?’ I’m in the locker room like, ‘This is unbelievable.’ I don’t know where that guy gets his information from so we’re not even going to give him credence on this show if that’s OK with you.”

The Steelers say Roethlisberger is suffering from bruised ribs.

In 2013, Rapoport reported that Roethlisberger was unhappy with the Steelers and wanted to be traded to the Arizona Cardinals.


You can listen to Ben’s full show here.