“I have every intention of playing next year. But I don’t want to even think about next season until this season is over.” — Ben. 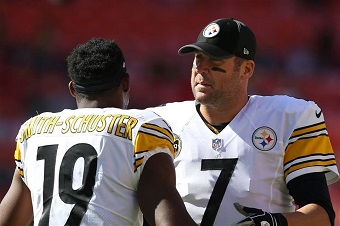 Ben’s show was moved to this morning at 11am because tomorrow is Christmas Day. Recap provided by 93.7 The Fan:

The Steelers season could be shortened after a 31-28 loss in New Orleans on Sunday – which could mean no playoffs as they now are on the outside looking in. But Ben is not counting out a Christmas Miracle.

He thought one might come at the end of the game yesterday when they were driving down the field late.


“You love having the ball in your hands trying to win a football game. It’s unfortunate how it ended but proud of the way the guys fought to the end.”

The way it ended was a fumble from Juju Smith-Schuster that ended any chance the Steelers had for a miracle come from behind win on the last drive, Ben shared some of the things he discussed with JuJu after the game saying if he plays this game long enough he will have many more chances of making winning plays and some more disappointments.


“I told him I was proud of him. He is one of the main reasons we had a chance to win that game…I was heartbroken for him.”

The loss really hurts the Steelers chances of making the playoffs….They will need a win and help. But Ben is not giving up hope.


“We have to take care of our own business. Nothing happens for us if we don’t win on Sunday.”

It also doesn’t mean the Steelers are in the playoffs by just winning either…they will need help and it must come form the Cleveland Browns who will need to beat Baltimore or a Steelers win and Tennessee/ Indianapolis tie.

Both games have been flexed by the league to 4:25 pm, but that doesn’t mean the Steelers players won’t see what is going on the scoreboard.


“We’ve been here before. We have had situations where we need a team to win, need a team to lose things like that so you’re gonna have people cheering and booing whatever it is so it’s gonna be hard not to at least see or know what is going on or hear it but, like I said, the focus has to be on Cincinnati.”

You can listen to Ben’s full show here.