“The story’s not written yet. I told the guys in there, ‘Listen, it’s not over yet. This chapter of the story is not done.’ We don’t control it, but let’s see what happens.” — Ben, during his post-game press conference. 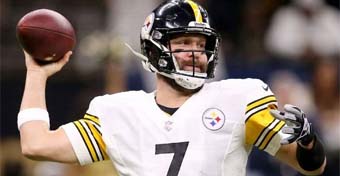 The Steelers will need to win on Sunday against the Cincinnati Bengals at Heinz Field (4:25 p.m. kickoff) and the Cleveland Browns will have to beat the Baltimore Ravens at M&T Bank Stadium for the Steelers to make the postseason.

“We weren’t able to get the necessary stop when we needed it on defense,” said Tomlin. “I chose to go for a fake punt and we were unsuccessful there. I take responsibility for that. I just wanted to be aggressive. I wanted to ensure we had the opportunity to win the game. I thought we had the chance to get it. I thought if we did not stop them we would have the opportunity to have the ball last. Which we did. Unsuccessful nonetheless.”

The loss masked a strong performance by Ben Roethlisberger, who completed 33 passes for 380 yards and three touchdowns and Antonio Brown, who had 14 receptions for 185 yards and two yards.

@_BigBen7
Hey, You just played lights out. Thank you for being our Quarterback.

The Steelers would be dangerous in these playoffs. But a Week 1 tie in Cleveland and a Week 14 loss in Oakland probably put their playoff hopes to bed. Now they need Baker Mayfield’s magic in a Week 17 game at Baltimore to force the Ravens into relinquishing the divisional lead.

The game won’t be without controversy. In a game this close, the image of Joe Haden gently patting Alvin Kamara on the back in coverage of a first-quarter pass that neither had a chance at catching will fume Steelers fans for days. Haden’s penalty, a highly questionable call at best, turned a would-be stop on fourth-and-2 into a 33-yard penalty to the Saints’ 1-yard line, which Mark Ingram converted into a rushing score.

On offense, Pittsburgh turned to the two players who have won clutch games for the team many times before — Antonio Brown and Ben Roethlisberger, who dazzled in the second half as Pittsburgh went to an near-all-passing attack.

Roethlisberger was near-flawless with 380 yards on 33-of-50 passing and three touchdowns, and Brown continued to spin around Marcus Lattimore for 185 yards and two touchdowns on 14 catches.

Between the second and third quarters, the Steelers’ offense broke off scoring drives of 97, 75 and 66 yards with only five rushing attempts, none in the third quarter.

In what might be his throw of the season, Roethlisberger split two defenders with a back-of-the-end-zone dart to a streaking Brown late in the third quarter.

And the game had tilted Pittsburgh’s way when linebacker L.J. Fort blocked New Orleans’ field goal attempt with 6:13 left to protect a 28-24 lead. The Saints were moving the ball swiftly, but Pittsburgh locked up inside the 40. The Steelers got three impressive second-half stops on one of the game’s best offenses.


You can read more from Mr. Fowler’s blog here.