Ben joined The Cook and Poni Show on Sportsradio 93.7 The Fan for the #1 Cochran Ben Roethlisberger Show which airs every Tuesday morning at 11 a.m. during the Steelers season: 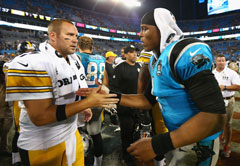 He told the guys how everything feels better this week after a very impressive performance this past Sunday night in a 37-19 win over the Carolina Panthers to improve to (2-1) on the season.

“The film yesterday, the meetings yesterday, everything is a little better after a win like that.”

“I told them that we have an opportunity to play Sunday night with everyone watching to redeem ourselves. I thought we did a good job of going out and redeeming ourselves on national TV.”

They did for sure and it was mostly done with an impressive ground attack that saw both running backs Le’Veon Bell and LeGarrette Blount rush for over 100 yards.

The biggest was an 81-yard-run from Bell and a 50 yd run from Blount both setting up short touchdowns.

Ben said they saw on film that the Panthers would take away the deep throws so they were going to have to run the ball and hit them with short throws.

“We knew going in that is what we were going to get and we had to take advantage of that. We ran the ball better than we had in probably 20-some years.”

Bell finished the game with 147 yards on 21 carries while Blount added 118 yards on just 10 carries.

“You got to see exactly, I think, what the off season hope was with these two guys. These two are the two headed monster and the third guy hopefully getting back Dri Archer this week will even add another and different element to the run game.” 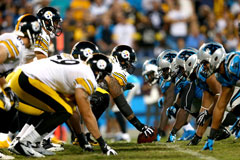 He also talked about how it was a great win but it came at a huge cost with the injuries to Linebackers Jarvis Jones and rookie Ryan Shazier, but the most significant could have been the injury to corner back Ike Taylor who may miss most of the season but Roethlisberger is not ready to say that.

The Steelers did add a familiar veteran to take one of those linebacker spots when they signed James Harrison on Tuesday. Harrison had just announced his retirement three weeks earlier but it’s a move that Ben likes very much.

“I think it’s great for that defense, that young defense to have another guy,” Roethlisberger said. “It’s going to be great to have that for some of those young guys. I know he still got it in the tank because I know how hard James works. I’m excited to see him back out there.”


You can listen to the full interview here (at the bottom of the page).