Ben continues to be one of the most popular guys in the airport this off-season! 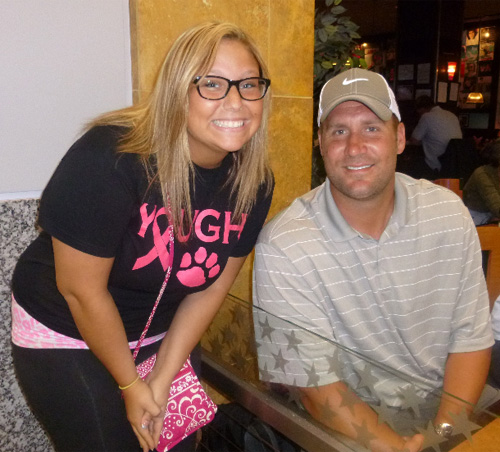 Gina Huss met Ben on her way to Dublin last week by way of the Atlanta Airport:

There were 6 of us (all born and raised in Pittsburgh!) going on a trip to Europe where we would be visiting Ireland, Wales, England, and France.. For 2 of us, it was our senior trip! We had a layover in Atlanta and then would be flying from there into Dublin airport. So there we were just hanging out in the Atlanta airport eating frozen yogurt when our adult chaperone came running over to us flailing her arms and freaking out because she just saw Big Ben with some friends at the nearby restaurant! Naturally all being from Pittsburgh, we approached him calmly and told him we were from Pittsburgh and wondered if we could take some pictures with him.

He was so nice to us and took pictures with all of us! He asked where we were going and one of his friends even knew the school district we were from! It was very cool to also find out that he was going to be on our flight to Dublin and that he was going golfing in Scotland!


*Thank you Gina!! Enjoy the rest of your trip!


You can see more fan photos and read their stories here.