The Steelers are in Dallas!

Home/News/The Steelers are in Dallas!
Previous Next

The Steelers are in Dallas!

The Steelers arrived safely at the Dallas-Fort Worth Airport this afternoon. 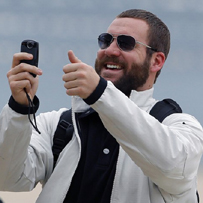 Ben held his camera high as he exited the plane, taking photos and video of his surroundings to “take it all in.”

He told reporters surrounding him later at the team hotel, “You step off the plane and you’ve got helicopters, you’ve got police, media and then this…if you’re not used to it, it could be overwhelming.”

But it won’t be for Ben.

His plan for the rest of the week includes “just taking it in stride, enjoying this opportunity regardless of what comes or how it comes.

“It’s always exciting for the opportunity to close up the season by playing in the Super Bowl. I don’t think you ever get tired of this, so take as much video and pictures as you can.”


You can check out video of the team’s arrival here.

Photos from their arrival and from Ben’s media appearance are here.