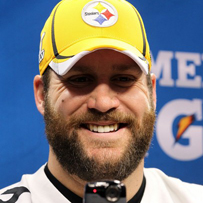 Throughout the hour of non-stop questions, he smiled, laughed and looked very relaxed. He shot video and took photos with his cellphone as he approached the podium.

When asked about the relationship he has with his teammates, Ben said, “I’m very close with a lot of the guys. One of my best friends is sitting over there next to me (as he pointed to his left at Brett Keisel). I knew that I always had…that there was a big group of guys I always had their support. There were just a couple that I wasn’t as close to as I wanted to be and needed to be and I have really worked hard to be closer with and be a better teammate with.”

He was also asked how he would describe his style of play, which is much different from the prototypical NFL quarterback, “I don’t know where a lot of the things I do came from. I think it’s just playing the game, I guess. Obviously, you do drills where you practice things like that, but a lot of those things, it’s just having…we call it ‘the clock’. That clock that goes off in your head and says it’s time to get out of here, you know, get out of the pocket, run, scramble, do what you’ve got to do.”

On his personal gameplan heading into a third Super Bowl appearance: “Just being calmer. Just waking up and counting your blessings. Just thanking God for letting you wake up and enjoy the day. I was going to bring a Twix bar up here if I needed a minute if I ever got a tough question (laughs). To still just enjoy this, because how many people ever get this opportunity? Like I said, this could be my last time to ever sit on this podium in front of you guys and if it is, it is. That’s what the plan is supposed to be.”

Ben spent the last seven seconds of the media availability counting down out loud before thanking everyone and walking off the stage.

It was a relatively uneventful Media Day. There weren’t any men in clown costumes or women in wedding dresses as in past years, but I did catch a guy wearing a Robin costume. I don’t know where Batman was! There were at least two different sightings of Troy Polamalu look-a-likes, one turned out to be Hines Ward and the other was Brett Keisel. I may never get those images out of my head!

“I think it went well,” Ben said as the interviews came to a close. “You have to enjoy it because this could the last time I sit up here, so why not?”


If you missed it…

NFL Network will replay Media Day at 5:00 p.m. today. You can also go to NFL.com and see video clips from the interviews.


You can also check out a few photos and quotes right here.

This is one SI.com article you will want to read!