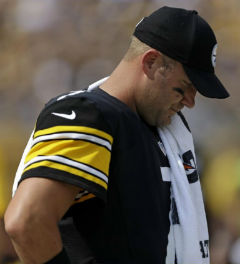 The Steelers, hoping to bounce back from an 8-8 season, tripped over their 2013 opener today, losing to the Tennessee Titans, 16-9.

It was one bad day all around for the Steelers. They lost four players to injuries, including what appears to be a serious knee injury for center Maurkice Pouncey. He was taken to the hospital in the first quarter.

Halfback LaRod Stephens-Howling left the game in the third quarter with a right knee injury. Cornerback Cortez Allen left with an ankle injury. Linebacker Larry Foote left with a biceps injury in the fourth.

The Steelers lost Pouncey on the drive following the free kick, when right guard David DeCastro, in what appeared an outside zone blocking scheme, tried to throw a block and dived straight into the lower legs of his center. Kelvin Beachum replaced him at center.


“It’s tough. He’s our captain and he’s our leader, and obviously a very good friend. You never like to see a guy get hurt, regardless of who it is. It’s tough.” — Ben, on the injury to Maurkice Pouncey.

The Steelers reached the Titans six, where on third-and-one, Isaac Redman never seemed to grasp the handoff from Ben Roethlisberger, the ball bounced into the end zone and Tennessee’s Moise Fokou recovered for a touchback.

The Steelers lost their second turnover of the game when cornerback Alterraun Verner intercepted Roethlisberger to start Tennessee’s scoring drive at the Steelers 49.


“Sometimes that’s all it takes in this game, a play or two…turnovers kill you, that’s why you can’t have it and it’s my fault.” — Ben, on the interception.

Tennessee, which trailed 2-0 following a safety on the opening kickoff, held the Steelers offense off the scoreboard until Roethlisberger threw a four-yard touchdown pass to Jerricho Cotchery with 1:23 left in the game.

The milestone made him the Steelers Digest Player of the Game:


You can read more from Mr. Labriola’s column here. 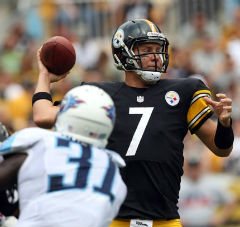 
“Congrats Ben! Win, lose or draw I always love my Steelers as painful as it is!” — Anna Bejarano


My QB @_BigBen7 is awesome, don’t care he is. He makes mistakes, yes. But he’s still the best. I love you Big Ben — ✰Steelers Nation✰ ‏@____korrea


“The big boy can throw. He has a strong arm.” — Eddie Galvan


“Congratulations on reaching the 30,000 milestone!!! We love you!” — Charlene Purta Bigelow


“I ride or die with this and I am just as proud today as I was in 2005 and 2008 to be a member of Steeler Nation and not another Q.B I want playing for this team.” — Henderson Thomas


“Good Job Ben…. sending support from Costa Rica…. get a back field and a healthy O Line and that will increase!” — James J. Timney


@_BigBen7 The good news this year, you can go home and hug your child and remember that is the most important thing in the world! — Jason Bowser ‏@JasonJbows