Gradkowski: Nobody better than Big Ben

Home/News/Gradkowski: Nobody better than Big Ben
Previous Next

Gradkowski: Nobody better than Big Ben

From Scott Brown’s blog at ESPN.com this evening: 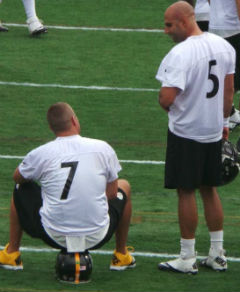 “There’s no doubt he’s the best quarterback in this league,” said Gradkowski, whom the Steelers signed last March to back up Roethlisberger. “Nothing against the other guys because there’s so many talented guys out there like a Tom Brady, Peyton Manning, Aaron Rodgers, Drew Brees.

“But Ben, the way he’s able to move around and avoid rushes and then if he sits back in the pocket how accurate he is. It’s hard for a defense to try and plan against him.”

Roethlisberger has also made even more of a believer out of Gradkowski because of the work he puts in off the field.

“I think he just does a great job of pushing his teammates to get better,” said Gradkowski, who spent the previous two seasons with the Bengals. “That’s what the quarterback position’s all about is to make the guys around you better, to demand a high level of urgency and a championship effort. I think with him under center that’s what it does around here.”

Thank you to fan Chad Pointer for the photo! You can see more “Fans Capture the Action” photos here.