Big Ben does it again!

Home/News/Big Ben does it again!
Previous Next

Big Ben does it again!

“He’s got to be in the conversation when you’re talking about the best quarterbacks!” — NFL Network game announcer Mike Mayock.

“I just didn’t want to let my guys down. It’s a close ballgame, we’re in a tight race right now, it’s an AFC North opponent. We were only up 7-3 so I was going to give it a go the best I could.” — Ben, post-game.

From NFL.com this morning: 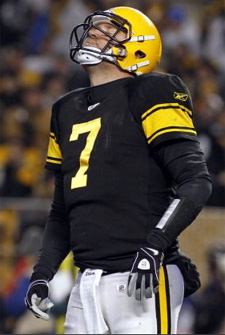 Quarterback Ben Roethlisberger played through a high left ankle sprain to lead the Steelers to a 14-3 victory over the Cleveland Browns on Thursday night.

Roethlisberger passed for 280 yards and two touchdowns, including a 79-yard scoring strike to Antonio Brown with 2:52 remaining, to help Pittsburgh win for the eighth time in its last nine games.

Roethlisberger went to the locker room for X-rays following a gruesome second-quarter sack, but he returned to start the second half, passing for 178 yards after the break.

The Steelers (10-3) moved a half-game ahead of the Baltimore Ravens in the race for the AFC North title.


You can read more and check out game highlights here.

You can watch Ben’s interview with Michael Irvin here.