“What I saw last night was phenomenal! It just gives you an idea how important the game is to him and how important being around his teammates is to him. That’s leadership.” — Former NFL quarterback and current NFL Network color announcer Joe Theismann, as a guest on Mad Dog Radio‘s Evan and Phillips in the Morning.

From ESPN‘s Jamison Hensley this morning: 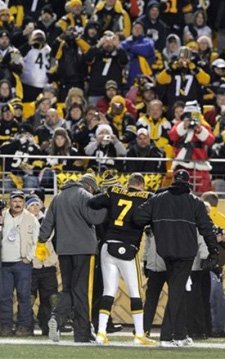 Roethlisberger won’t win the offensive player of the year honor, either. Give that to Drew Brees or Tom Brady.

If there was a trophy for grittiest quarterback, though, the unanimous pick would be Roethlisberger.

When it comes to playing in pain, there is Roethlisberger, and then there is everyone else in this generation of football players.

“I thought my leg was broken, honestly. One of the most painful things I`ve ever felt. I didn`t want to feel that my foot was outside of my leg.” — Ben.

Ben Roethlisberger has a high ankle sprain and will have an MRI on it Friday morning. X-rays taken immediately after the injury showed no broken bones but the MRI will show if there is more ligament/tendon injuries in his left ankle.

Roethlisberger told me that he had one a long time ago. Usually, when you’ve had one, the second will heal much more quickly. Ben told me that he didn’t think that was the case because his first one happened so long ago.

High ankle sprains can keep players out of action for weeks and even though Roethlisberger returned to play in the second half, it does not mean he will be able to play against San Francisco a week from Monday.

Just don’t bet against it.

“He knows the whole team is on his shoulders. It’s going to take a lot to sit him down.” — Willie Colon.

From the Pittsburgh Tribune-Review‘s Dejan Kovacevic: 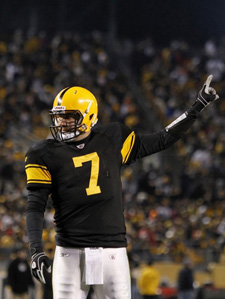 When he took the field, the crowd stood and roared. But he could barely move, and a few throws were off target. On one play, he nearly fell on his face in executing a simple handoff to Rashard Mendenhall. But he adjusted, as he has before, staying in the pocket and working out of the shotgun. And he connected with Brown when it counted most, lifting the Steelers to a key victory that has them at an AFC-best 10-3.

His final tally was 16 of 21 completions for 280 yards and two touchdowns.

After Roethlisberger’s reaction to the Brown touchdown, at least one person in the stadium noticed he was alone. That’s when left tackle and longtime friend Max Starks trotted out to the field, where the two embraced.

“I saw everybody else was down there with Antonio,” Starks said, “and I knew Ben would want to be down there, too. That play started with him.”

Everything the Steelers do starts there.

“Takes a lot to get that man out of the game. You need a stretcher.” — Charlie Batch.

And from the Pittsburgh Post-Gazette‘s Ron Cook:

You watched the players emerge from the tunnel and the warmth of the Steelers locker room. One by one, they returned to the Heinz Field lawn. It was almost time for the second half against the Cleveland Browns Thursday night.

You saw Charlie Batch warming up, apparently ready to take control of the team again in the second half. But you didn’t see Ben Roethlisberger.

Then, suddenly, he was there.

Of course, he was there.

Roethlisberger would play the second half.

It was the very best part of a surprisingly difficult 14-3 victory.

“People want to hate on him all they want, but the guy`s one of the toughest competitors in this game!” — Brett Keisel.

*Injury update: Ben’s MRI confirmed a high-ankle sprain. He will remain in walking boot. As you can imagine, it was “not feeling good” today!

*For links to video of Ben’s interviews (post-game and with with Michael Irvin pre-game) and game highlights, check the post below!