“Twas the night before the game”

Home/News/“Twas the night before the game”
Previous Next

“Twas the night before the game”

Back by popular demand… 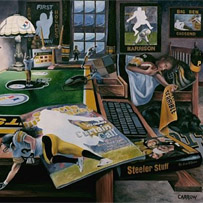 Twas the night before the game, when all through the house,

Not a creature was stirring, except for his mouse.

The posters were hung, on his walls with great care,

In hopes that Big Ben, soon would be there.


The child was nestled, all snug in his bed,

As visions of touchdowns, danced in his head.

Terrible towel for his hand, bedpost for his cap,

He and his dog, settled down for their nap.


When up on his desk, arose such a clatter,

Should he awaken, the players would scatter.

From posters and photos, the players came forth,

Rehearsing the game, this team from the North.


With halftime approaching, the Cardinals were poised,

To score a touchdown, and end all this noise.

The call was to blitz, but deep in his mind,

James saw this before, and dropped in behind.


A slant to Fitzgerald, could never miscue,

He slyly slipped back, and made a quick slash,

Intercepting the ball, for a one hundred yard dash.


Now Larry was game, and would never give up,

He’d run down this thief, who drank from their cup.

He could never get near, with this team that surrounds,

In order to catch him, he’d sneak out of bounds.


With a heart from the Burgh, but his apparel now red,

A pass up the middle, and the birds were ahead.

Ten peeked at the clock, its time to be great,

We’ll give it our best, and seal our own fate.


One final drive, to take back the lead,

Get Santonio the ball, and we’d surely succeed.

To the corner he ran, to the ball he did stretch,

Two toes in the zone, for the game winning catch.


He ‘woke the next morning, his visions had waned,

Twas merely a dream, yet the ticket remained?

And later that evening, his dreams they proved right,

“Seasons beatings to all and to all a good-night.”


*Thank you to Fred once again! Check out his website (and a larger version of the print) here .