“He’s a ‘Night at the Improv’ every time he comes to work. He reminds me of John Elway.” — Former NFL linebacker and current NFLN game analyst Matt Millen referring to Ben during the game. 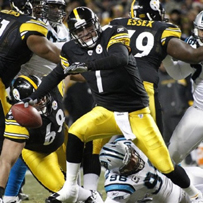 Ben Roethlisberger completed 22-of-32 passes for 320 yards and one touchdown while adding a second score on the ground to lead the Steelers to a 27-3 victory over the Panthers in a dominant Week 16 performance.

Shaking off another bloody nose, Big Ben was on fire early, completing 13 of his first 15 passes for 198 yards and a score by late in the second quarter. Both players did a nice job of reading the blitz and changing to a hot route when Roethlisberger hit Mike Wallace for a 43-yard touchdown to jump out to a 10-0 lead. Even with a huge lead, play-caller Bruce Arians kept the pedal to the medal until the fourth quarter, allowing Big Ben to clear the 300-yard mark.

Quarterback Ben Roethlisberger was shaking off tacklers all night and completing passes on the move to put the Steelers (11-4) in position for a first-round bye in the playoffs and a home postseason game.

Roethlisberger came up a little woozy after taking a hit in the second quarter. His nose, which he recently had surgically repaired after he broke it against Baltimore, was bleeding and he briefly retreated to the Steelers’ locker room.


“Ben Roethlisberger, this guy’s a tough guy and he’s getting better every week.” — NFLN’s Steve Mariucci during the Post-Game Show.

Steelers quarterback Ben Roethlisberger and wide receiver Mike Wallace became just the second quarterback and second receiver to post 300-yard passing and 100-yard receiving games, respectively, against the Panthers this season. Roethlisberger tallied 320 yards with one touchdown on 22-of-32 passing, while Wallace accumulated 104 yards with one touchdown on four catches. They joined quarterback Joe Flacco with 301 yards for Baltimore (11/21/10) and wide receiver Larry Fitzgerald with 125 yards for Arizona (12/19/10). 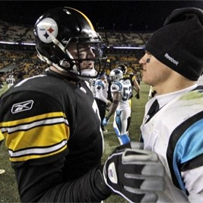 Pittsburgh improves to 11-4 and gets one step closer to securing the AFC North division title and a first-round bye in the playoffs. The Steelers will wait for the result of this weekend’s game between the Baltimore Ravens (10-4) and Cleveland Browns (5-9).

If Baltimore loses, Pittsburgh clinches the division and has the option of resting key players in its Week 17 game against the Browns.

If the Ravens win, both Baltimore and Pittsburgh have to play out the final week.

Coach Mike Tomlin confirmed that Ben did not re-break his nose when he was temporarily forced from the game. without missing an offensive snap.

Ben’s helmet hit the bridge of his nose as he fell to the ground, causing it to bleed. The doctor that did Big Ben’s surgery determined that the gash was not serious enough to merit an X-ray Thursday night. Ben did not miss a snap.


And the Award goes to:

Ben is the Steelers Digest Player of the Week after his performance last night against the Carolina Panthers.

“I felt like we did some really good things tonight. We’re always striving to get better, and do some better things. Every day and every game we get a little bit better and that’s important right now.” — Ben.


“That was better. That was a better effort today. I think overall we did a good job being that it was a short week. We didn’t really have a lot of time to prepare, but I think guys just really did a good job of taking care of the little things [and] making sure we didn’t go out and have a bad effort today.” — James Farrior.


“I left a lot out there. We got the win which is great, feels good, especially at this time of the year. But, I still left a couple throws out there and a couple things here and there that I’ve got to improve on.” — Ben.


“He’s a tough sack. He plays off of their big offensive line, so whatever he gets he gets. You have to balance up and try to get to him.” — The Panthers’ Tyler Brayton on Ben.

You can watch the Steelers post-game press conference (Coach Tomlin and Ben) here.


You can check out Ben’s game highlights here.


You can see a few game photos here.

What to watch while you’re wrapping those last-minute gifts… 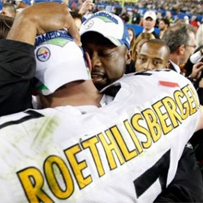 – 2:00 p.m. America’s Game: The 2008 Steelers – Re-live the story of the 2008 Steelers through the eyes of Mike Tomlin, Ben Roethlisberger and Troy Polamalu. Narrated by Jon Hamm on NFL Network.


The Steelers asked fans and members of the media to make their selections for “Top Ten Pittsburgh Steelers” – Ben made the Top Ten in the fans list as well as two of the three media members’ lists.

To the family of Issac Eli Wilson, who was given a “shout out” on the site a the end of October as he prepared to watch the Steelers in New Orleans.

Isaac lost his battle with cancer yesterday morning, two days after his 40th birthday. His family members say “he went out with his Pittsburgh Steelers cap on” and with his Steelers blanket wrapped around him. They hoped the Steelers would win last night for him!