Ben, Brett Keisel and Merril Hoge were at the Archery Trade Association Show in Kentucky earlier today checking out the latest in Archery and Bowhunting equipment, as well as posing with fans and dealers at the popular show.

The ATA Show runs through tomorrow at the Kentucky Exposition Center in Louisville. 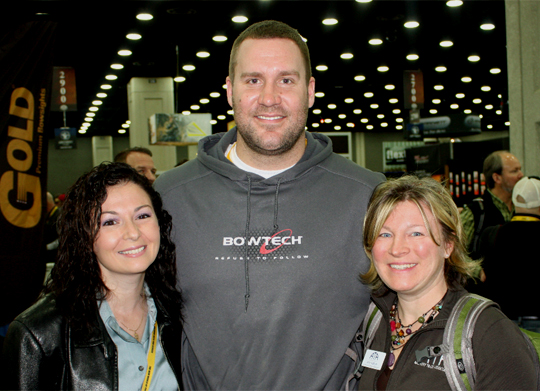 Although not a Steelers fan, Teresa did say that she “decided a mutual love of archery was more important than team loyalty” when it came to posing with #7!

This is my third year (at the ATA Trade Show) and we’re hoping to bring it to Pittsburgh so it’s a little closer for us. I’ve met some good friends through Bowtech and have developed even more friendships through (archery). I enjoy coming here because I love hunting, that’s the main reason. To come here and see the new things coming out and to see friends I don’t get to see except for this time of year is excellent.


How do you find time to hunt during football season?

We usually get one or two days off a week – or at least half days – so I usually get out quite a bit. Now that the (football) season’s over, I’ve been out the last five or six days. I get out as much as I can, trust me.


How did last deer season end up for you?

We’re doing a lot of herd management and killing a lot of does and we’ve taken a couple nice bucks off my parents’ property. Overall, the turkeys and deer have been great.

You can also stop by USA Archery’s website here.

T.R.U. Ball Archery was pleased to see Ben, Brett, and Merril Hoge at the show as well! 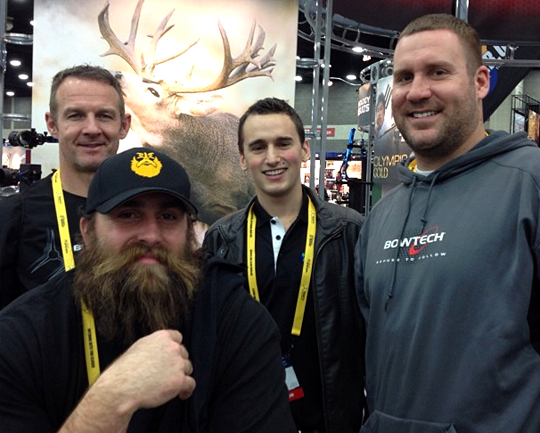 That’s Tommy Troyer, of T.R.U. Ball Archery, who tweeted that he was just “Hanging with Big Ben, Brett Keisel, and Merril Hoge”. He also said he felt “small” standing next to these guys!


You can check out T.R.U. Ball Archery’s website here.

You can read more about the ATA Show on their website here.


Ben also met up with his friend, Nick Sampson for another friendly challenge! Last year, the two competed in the Pink Bow Challenge. This year, it was a Flying Archery Contest, although Ben did his best to ice the kicker, so to speak!

*Thank you so much to Teresa, Amy, Matt, Tommy, Nick, ATA, USA Archery, and BowDudes!