Home/News/First fan photos of 2013
Previous Next

The new year is just a few days old, but we’ve already had some great pictures sent in of lil’ fans, big fans and even a couple of Steelers pets, and all have been added to Ben’s photo gallery! 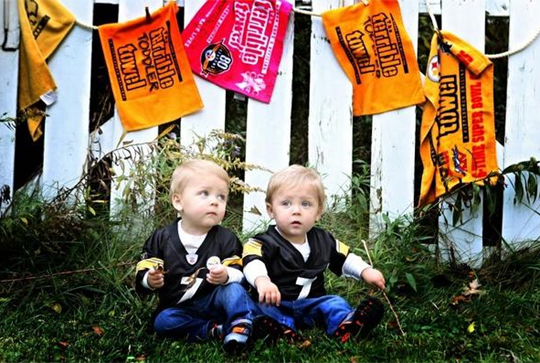 19-month old twins Cooper and Camron Grodi are just chillin’ in the garden in their #7’s day-dreaming about the start of Steelers Mini Camp!

“They sure love watching the Steelers”, says their mom, Jackie. “Every time football comes on they are yelling, ‘go, go, go’ and ‘Touchdown’!”

You can check out all the latest photos in one place (two pages worth)!

He had his photo taken with Ben after the two met in the airport in March of 2012 and shared it on Twitter:

“It’s a great feeling when Roethlisberger introduces himself to you and thanks you for your service. Great guy! It was incredible to have him come up to me…I really appreciated it!”

Noah had just completed the White Sands Missile Range 23rd Annual Bataan Memorial Death March in New Mexico, and was on his way home to Alabama when he met Ben in the airport. Noah and his team, TEAM X-T.R.E.M.E completed the 26.2 mile march wearing 47lb packs and gas masks.

His photo with Ben was also featured as the website’s Photo of the Week in November during Veterans Day week to coincide with Ben’s Salute to our Troops tribute!

Not only did Noah and Ben become friends after their chance meeting, but Noah hasn’t stopped moving since that March in March:


Noah has many more events planned in the new year, including a Super Spartan Race.

Noah is determined to inspire others by his actions, by training like a machine and demonstrating that challenges are meant to be conquered no matter how big they might be.

You can try and keep up with the amazing Noah on his Facebook page here!