Veterans Day: Salute to our Troops

Home/News/Veterans Day: Salute to our Troops
Previous Next

Veterans Day: Salute to our Troops 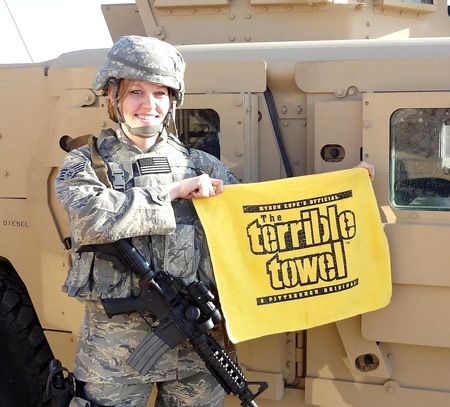 “This was taken in Kuwait in December 2011. Most of the season I watched the games at 2am (streaming on a computer) waving my towel around a bunch of Kuwaiti air traffic controllers. They just didn’t get it! lol. Thanks again Ben for supporting us! Proud to serve my STEELER NATION!” — SSGT Holly Stene, United States Air Force, hometown: Johnstown, PA. 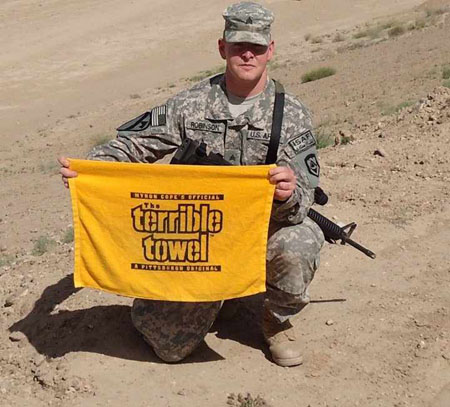 “I’m with the 119th Engineer Company of the West Virginia Army National Guard and this was taken during my tour in Afghanistan.” — SGT Jacob Robinson, WV National Guard. 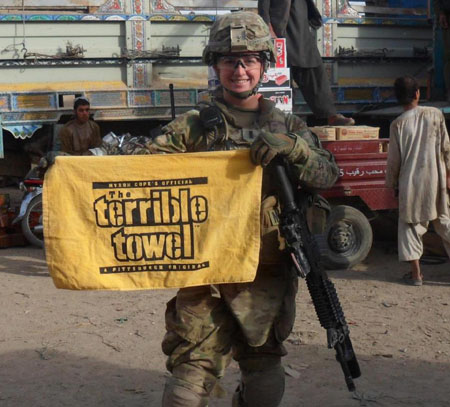 “I was a Platoon Leader, stationed in Kandahar, Afghanistan from 2012-2013. My Platoon mostly did walking patrols throughout the city, and I made sure my Terrible Towel was tucked in my cargo pocket on every one. By the end of my tour, both my Soldiers and my Afghan counterparts were accustomed to when I pulled a security halt to get a photo of my Terrible Towel in different parts of the city. My Towel has accumulated quite a bit of the Afghanistan desert sand, but it now proudly hangs in my living room and will go with me the next time I get to go home to Pittsburgh and see the Steelers play!” — 1LT Megan Conroy, 2nd Platoon “Wolfpack” / 563rd MP CO (Fort Drum, NY).

You can see more of our military Steelers fans – serving in Asia, Iraq, Afghanistan, South Korea, and closer to home from Quantico Marine Base in Virginia to Fort Benning, Georgia – all right here.


Thank you to every one of you that submitted photos to us over the past year so that we could honor you, our true heroes!

Members of Steeler Nation UK salute our American Troops from WWII in a special way: 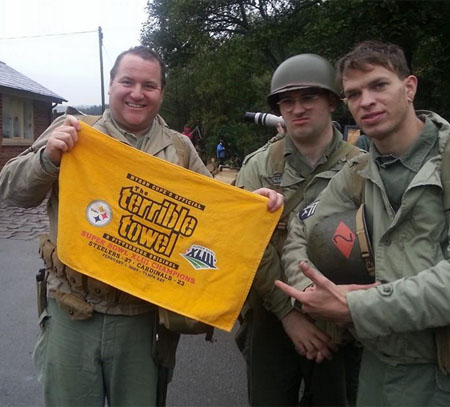 Andrew Duncan poses with the Terrible Towel during a break from a WWII reenactment he participated in this past October. His group is called, Normandy 44, and they honor the memories of the men who fought and died fighting for their country.

“I’ve been reenacting WW2 troops in the 29th Infantry and the 2nd Rangers for twelve years now. We’ve been to Normandy almost every year for D-Day to pay our respects to all who laid their life down. We also do schools talks about the unit and the history of what these heroic men went through during the war.” — Andrew


Thank you to Andrew and the men of Normandy 44 for continuing to honor the brave men of WWII and in the process, helping to keep their history alive!

Also on this Veterans Day:


Play Santa for our troops this holiday season!

The gifts you purchase from the USO Wishbook allow you to recognize a special occasion while directly benefiting troops and their families. You can send everything from a “comfort food” package to a good book to comfortable chairs!


You can learn more here.


And let us not forget…

Donations are currently being accepted for the 2013 Wreaths Across America Remembrance Ceremony. 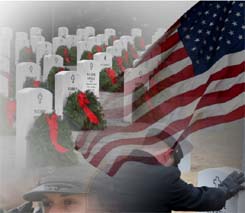 “Our mission, Remember, Honor, Teach, is carried out in part by coordinating wreath laying ceremonies a specified Saturday in December at Arlington, as well as veterans’ cemeteries and other locations in all 50 states and beyond. We also organize a week of events including international veteran’s tributes, ceremonies at State Houses and a week-long “Veteran’s Parade” between Maine and Virginia where we stop along the way to spread our message about the importance of remembering our fallen heroes, honoring those who serve, and teaching our children about the sacrifices made by veterans and their families to preserve our freedoms.

“This week of events is made possible by thousands of volunteers who organize local ceremonies, raise funds to sponsor wreaths, and participate in the events. We receive no government funding. The cost of our programs is paid by individual wreaths sponsors, corporate donors and volunteer truckers.”


If you would like to sponsor wreaths to be placed on the veterans’ graves this December, now is the time!

You can also participate in the Wreaths Across America Day which is scheduled for Saturday, December 14th!


To donate and to learn how you can take part in this wonderful organization, click here.