“I look at the Rooneys like they’re family. They’re like grandfathers and fathers to me. I can speak on my behalf, my agent, my family. We have never asked. We’re not going to ask. This is home and this is family. The people of Pittsburgh and the fans, that’s family. That’s why I’m so adamant and upset that this got brought to my attention at the end of the game.” — Ben, on his show today. 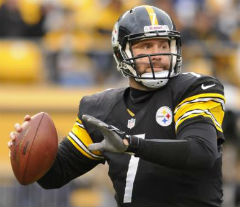 Pittsburgh Steelers quarterback Ben Roethlisberger is frustrated, but not for the reasons that may have been detailed in an NFL Network report.

“I’m tired of it. It upsets me,” Roethlisberger says of the NFL Network’s report that he is upset about the team’s direction and will demand a trade at season’s end.

As for Ben’s emotions at this point in the season, he admits he’s frustrated.

Ben also looks inside his relationship with Offensive Coordinator Todd Haley, bristles at suggestions that the team is rebuilding, and looks ahead to next week’s matchup against Detroit.


You can hear the podcast here (bottom of the page).