We interupt the great photos from Ben’s Youth Football Camp

We interupt the great photos from Ben’s Youth Football Camp

…to bring you the latest from the first day of Steelers mini-camp! 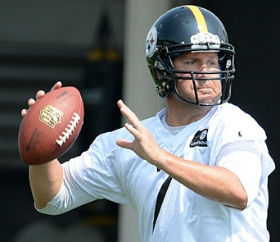 Quarterback Ben Roethlisberger, who is entering his 11th season, has been a regular at the team’s practice facility during the offseason, attending the voluntary workouts and OTAs and setting an example for the younger players.

Steelers quarterbacks coach Randy Fichtner talked about his prize pupil during the team’s minicamp, singing his praises for the work he has put in and how he is looking.


1. On Ben and what he has shown this offseason:

“I’ve seen him a lot and that’s been great. I know with a new baby he is a little more of a home body now so I see him a lot more now. You see him in the building a lot more. He has made a big, conscious effort to be around at every function that we had, all the pre-OTAs, all the OTAs. It’s just great having him in the building.”


2. On if being around shows his leadership and the impact that has on the younger players:

“It does help with the youth, the younger guys on the team. But it also gets everyone excited when they see him in the building.”


3. On the fact that it’s not just the younger guys who benefit from his presence:

“He even pumps up the coaches, old, young, new. When he comes in the building there is an energy. Everyone feels it. We feel it when he is on the field. He has had a great spring, done a really nice job taking care of his body and training. He looks really healthy.”


4. On if there are any difference in his training:

“He tweaked a few things. I know it was nothing he hadn’t done before, maybe just a little more intensity.” 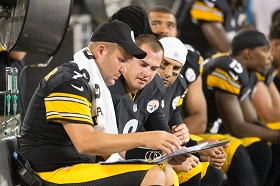 Yes, he threw 17 touchdown passes and only six interceptions over the second half of last season. And he went four straight games without a turnover, and he completed 61.2 percent, and he posted a 92.1 passer rating. All of those things are what Ben Roethlisberger did on the final eight game days of 2013 for the Steelers, but in offensive coordinator Todd Haley’s mind what was even more special was what Roethlisberger was doing on the Wednesdays leading up to those game days.

“In those low times the true leadership of the team shows, and some of those low Wednesdays when we came out for practice and were 2-6, it could have been easy to just go through the motions,” said Haley. “But in those situations you saw Ben take charge, and a lot of those practices that were make-or-break practices from the coaches’ perspective, you could see there was no quit. We kept fighting until the end when we were watching Kansas City miss the field goal against San Diego in overtime in that last game of the season that kept us out of the playoffs. Even though it was a rough, tough year and nobody was satisfied with it, a lot of good came out of it that should help us moving forward.”

While Haley believes strongly in what new offensive line coach Mike Munchak will bring and that Lance Moore can become what Jerricho Cotchery was for the receivers both on and off the field and that Dri Archer and Martavis Bryant can be more than typical rookies, the reason behind his own positive outlook has to do with the quarterback.

“They all see him as the leader of the team. It’s very clear that when Ben speaks, or he’s on the field for his set of plays in practice, he’s running the show,” said Haley. “Whether guys are on the field with Ben or not, they’ve all got their ears perked up and they’re listening to anything that he says. The entire group will look to the quarterback always, and we’re fortunate we have a guy who has played well in a lot of games and played well in a lot of big games. And because he’s not going to be satisfied unless we’re playing in the final game, the Super Bowl, the entire group, being a younger group, will lean on Ben all the way until we get there.”


And to parents & grandparents: keep those photos from Ben’s camp comin’! We’ll post ’em in Ben’s album this week! Email them to BigBen7website@gmail.com!