“It’s been fun. This week in practice I felt a little different. Maybe it’s in part being back here, in part knowing I am going to get to play a little bit. I have had a little juice bolt, whatever you want to call it to get you going. This week has been exciting so far knowing you are going to get some reps, get out there with the guys and have some fun. I definitely feel what they are feeling.” — Ben.

From Ben’s interview with the media today via Teresa Varley, Steelers.com: 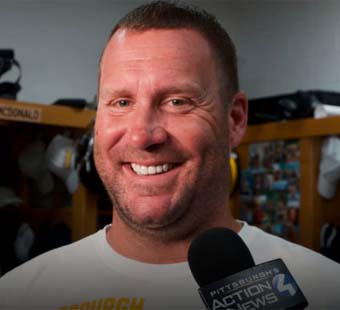 Ben Roethlisberger will see his first action of the preseason on Sunday night when the Steelers head to Nashville to take on the Tennessee Titans.

It’s the same path Roethlisberger followed last year, when he didn’t play in the first two games of the preseason, seeing his first game action in the third preseason game in 2018 as well.

Roethlisberger said it will be a good warmup for the regular season, and he sees some value in getting the time on the field, even though he has been there, done that as he enters his 16th season with the Steelers.

“There is some value because every game in the NFL counts,” said Roethlisberger. “In all of the other major sports you can get away with losing some games, you can kind of warm up to it because they are so long. With our season you can’t really afford to do that. If you get out there and get the actual game speed and stuff, it’s definitely beneficial. I do think it’s a fine line you walk of not doing too much for risk of injuries and everything that comes with that. That’s the fine line a coach walks. Even if you play a little bit. Say you play all four games a little bit and you don’t play sharp in the opener, there is always going to be something. You just have to hope if you don’t play sharp in the opener you play well enough to win.”

While Roethlisberger said he will play on Sunday night, he isn’t sure how long he will be out there. That is a decision that will be made by Coach Mike Tomlin.

“He pretty much tells me what he wants me to do,” said Roethlisberger. “Sometimes there have been times when he has told me I am done. I will say one more series because it doesn’t finish the way you wanted. But 99.9% of the time he overrules me.”

One of the key factors for Roethlisberger is to get that first hit, but at the same time not take too much of a beating. He plans on some quick passes to get rid of the ball, but still knows getting hit can be beneficial.

“For a quarterback you want to feel that one hit,” said Roethlisberger. “It’s been since the last game of the year. Most of these guys get at least thudded around and hit a little bit. I don’t, so that first one always hurts a little more so you want to get it out of the way early.”

The plan is for Roethlisberger to get work with as many receivers as possible, from those who have been here in JuJu Smith-Schuster and James Washington, to newcomers like veteran free agent Donte Moncrief and rookie Diontae Johnson.


You can watch video of Ben’s Q&A here.