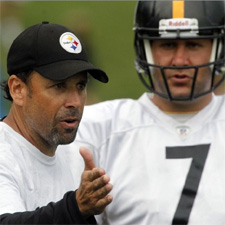 – Ben on working with Todd Haley in camp: “[It] really has been good, it’s been good ebb and flow, talking, changing things; he’s been open to hearing some change, I’ve been open to changes from him. So it’s been really good. Every day we learn something new about either each other, the relationship, the offense, something. We take it, we run with it and we’re not looking back.”

– Todd Haley on Ben and the No-Huddle Offense: “It’s a quarterback league, and after 16 or 17 years of coaching, I now believe that. You need a guy who’s going to be the field general, move the team up and down the field and control the huddle, handle the defense. Ben is in that group of top guys, and he’s proven it from Day 1 in the NFL…with Ben handling the football on every snap, it makes it fun for all the coaches.”

You can read more here and here.


– Ben was a call-in guest this morning on NewsRadio 1020 KDKA. Topics included training camp thus far, the offense, Mike Wallace, a message for Ron Cook, and being a father!


– No, Ben is not worried about a partial rotator cuff tear that occurred last November. You can watch his interview (video) here.


– Now you can rock gear inspired by the number one film in America ‘The Dark Knight Rises.’ Under Armour has collaborated with Warner Bros. Pictures and the Christopher Nolan-directed film to release a collection inspired by the Gotham Rogues, the football team featured in the film. The collection includes T-shirts, hats, hoodies, sweatshirts, a Varsity jacket and authentic jersey (for men). The entire line is now available on Under Armour’s website. NOTE: The only jersey number available is #12.


– The latest photos from training camp are in the gallery!