Ben spoke to the media this afternoon after the second day of Mini Camp: 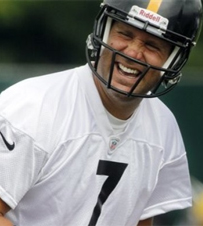 “I’m not going to change my game. Coach can do what he wants to add protection and do things like that, but I’m going to play the game the way I know how. It’s worked okay for me so far.”

“I don’t think there’s this big revelation like I need to do this, or do that. It’s just don’t take hits, but I don’t know how not to do that.”


On the comments made by his teammates about his “transformation” –

“To hear that and hear that from those guys is an honor. I mean, everyday I try to be the best teammate, and now the best husband and soon-to-be father that I can be because that’s the way it should be.”


Ben also talked about his fans, the offense, Mike Wallace and more. You can watch/listen here.


“A lot of quarterbacks don’t have that ‘it’ factor. You’ll find a great quarterback who’s accurate, who can throw the ball, but you look for a guy who has ‘it’ and he has it! Basically, you can relate it to like [Michael] Jordan. In the last minute of the game, you want the ball in his hands. You want the ball in the ‘it’ guy’s hands.” — Browns WR Joshua Cribbs, on Ben’s play.

Ben was ranked as the 30th player in the NFL’s Top 100 Players of 2012 list which was revealed in tonight’s episode. NFL.com’s Gregg Rosenthal thinks Ben remains underrated:

Steelers quarterback Ben Roethlisberger is a two-time Super Bowl champion. Practically every game he plays is on national television. And yet he’s still underrated.

And yet he was behind running backs Frank Gore, Arian Foster and Ray Rice on this show alone. We love that trio, but all running backs are replaceable. Roethlisberger was behind Clay Matthews during an off year.

If you were starting a team, would you consider any of those players before Roethlisberger?