“When you are the best in the world you want to help win football games. We’re all a little frustrated because we aren’t winning right now.” — Ben on Antonio Brown. 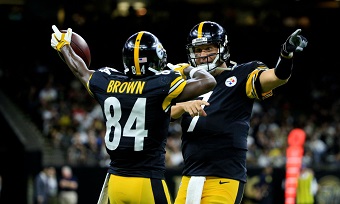 Ben Roethlisberger knows what he has in Antonio Brown.

“He is the best in the world,” said Roethlisberger on Wednesday morning.

When you are considered the best by everyone around you, when you want to deliver for your team every game because you have such a passion for winning, a passion for perfection, you get frustrated when it doesn’t happen.

That’s exactly what happened with Brown on Sunday, when he was seen on the sidelines during the Steelers-Chiefs game arguing with offensive coordinator Randy Fichtner. It was frustration coming out.

“I just talk to him (when he gets frustrated), tell him to stay with us. He isn’t the only guy that gets frustrated in games. We all get frustrated. Like I said, when you are the best in the world you might get a little more frustrated than others. AB is a very passionate football player. We all know that. The fans know that. That is what makes him special, his passion for this game and the passion to be great. We’re not going to want to take that away from him. When he gets frustrated in games, just tell him to stay with me, talk to me, communicate with me, let me know if I missed you on something, if there is a way you are getting open and I didn’t see it. Let’s just talk and communicate and he does a great job of doing that.

“It’s early in the season. It’s two games in. Guys did some things the first game, we had some elements that didn’t let me get him the ball as much as I should have. Last week they put some guys on him, but other guys were open too. I am not worried about AB. He will be just fine.” 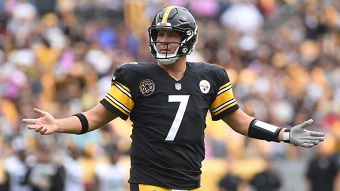 Roethlisberger, who isn’t on social media, said he has encouraged teammates to stay away from replying to those who are trying to get a response from them, but Brown has the right to reply as well.

“It’s the freedoms that we have in this country. We have the opportunity to say things we want,” said Roethlisberger. “I don’t do it. There have been times I have told guys try to be smart.

“Isn’t that the point of trolls, people that sit behind a computer in their mom’s basement or wherever they are, trying to bait you into saying things. I just think you have to be smart and rise above it at times.”

Roethlisberger knows Brown has no interest in being traded, that it was more of a reaction to comments made about him than anything.

“I was not worried. If I spoke to him and personally he reiterated those things to me, or if I felt like it was personally coming from him and not just a reaction, I would have a little more worry,” said Roethlisberger. “As of now I don’t feel any worry.”

Roethlisberger said the main thing for all of them now is to just focus on Monday night’s game against the Tampa Bay Buccaneers. They are facing a 2-0 team that is hot right now, and the only thing they want to do is turn around their slow start.

“We just want to win,” said Roethlisberger. “Every game to us is a must win. It’s a big one for us because it’s our next opportunity to go out and get on the football field.

“You just want to get a ‘W’ in that column. There is no panic. It’s just a matter of going out and focusing and making sure we do what we have to do to win the football game.”


You can read more & watch the video of Ben’s interview here.