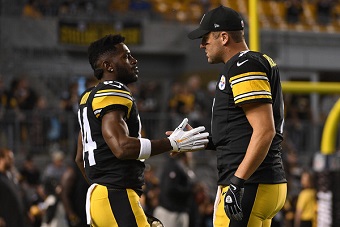 There is no panic in Ben Roethlisberger, despite starting the season a disappointing 1-2-1. Roethlisberger knows that you can’t panic, that they have been down this road before and can turn it around.

“You have to bounce back when you have a bad day,” said Roethlisberger. “When you start stacking bad days, then you start getting worried. Get here a little early today and be ready to go.

“We have been 0-4 before. Last year we started a little sloppy too. You guys can look at the record all you want. We’re not. We’re looking at this next week and trying to get a win. That is all that matters. If this has to happen, it’s better to happen early in the season than middle or late in the season.”

Roethlisberger shoulders much of the responsibility for the performance of the offense, and didn’t hesitate to take blame for Sunday’s loss to the Ravens. As a leader of the offense, he takes it upon himself to get things rolling moving forward.

Roethlisberger is hoping to get one of his favorite targets through the years going this week. Through four games Antonio Brown has 29 receptions for 272 yards and three touchdowns. They aren’t Brown like numbers, especially the yardage, and Roethlisberger was asked if teams were doing something different to neutralize him.

“We have seen so many things in the last nine years it’s hard to show anything different,” said Roethlisberger. “I just have to play better to help him get his numbers, which in turn will help us get wins.”

Roethlisberger said they have moved Brown around in the offense, lining him up differently. But when it’s Brown, there is going to be coverage no matter where he lines up.

“Two of the first three plays of the game he was in the slot,” said Roethlisberger. “We do move him around. You still draw a lot of attention wherever you go.”

Roethlisberger said he hasn’t noticed the deep safeties giving Brown any more attention this season with Martavis Bryant no longer on the team, a player who was a speedy weapon downfield.

“Not more than they have in the past,” said Roethlisberger. “He always gets that safety look leaning. It’s just a matter of me being able to get them the ball.


You can read more & watch the video here.