Ben answered questions in the locker room today after practice: 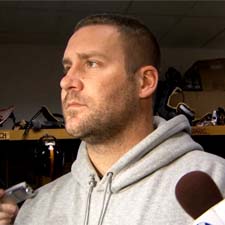 It’s a hard place to play. They’re a good team. I don’t remember a lot of the game but I just know going there is never easy.


His feeling on that “letdown game” –

I hate that, the whole letdown game-type thing because everyone knows that any week in this league, any team is good and any team can be bad and anybody can win. We just have to go out and approach it like we need to play Steelers football. It doesn’t matter who we play, we need to go play Steelers football. That’s the kind of approach we’re going to have this week as well.

He’s our coordinator. He’s calling the plays. We just do whatever we feel we have to do to win the game, run the ball, pass the ball, throw deep or throw short. We take in pride in being able to be diverse.


On what he attributes his lower sack totals to this season –

A little bit of a couple things. I think the line has been playing great. They’re doing a great job. I think the offense just calling short pass plays and you could in turn say that I’m getting the ball out of my hands. But guys are getting open in shorter routes because that’s what we’re doing and we’re not taking quite as many shots deep down the field. It’s a combination of all those things.

We’ve always felt we’ve got deep play guys but as we saw the other night, we can also get it to them quick and let them go the distance. We just try to have a happy medium. When do we take our shots? We still have to have those plays because we’ve got guys that can stretch the field. But we also have guys that we feel we can get them catches short and let them run long. That’s the approach that we have to be able to take as well. Whatever works, as long as we get in the endzone, it doesn’t matter how we get there.

[Laughs] A little bit. He hasn’t come out and said anything like “Let’s go get ‘em” or anything. But you always have that feeling. It’s the same thing when we play the Jets for Jerricho Cotchery or anybody that comes to this team from another team. You as a team want to get that win for those guys, like when we went to the Super Bowl and had Flozell [Adams]. Just things like that, you want to do it for those guys.


You can watch the video of his full interview here.

You can read his full interview here.

Another milestone for Ben, compliments of the Pittsburgh Post-Gazette’s Ed Bouchette via Twitter/Sulia –

24 quarterbacks in NFL history have accomplished this and Steelers Ben Roethlisberger is about to become No. 25.

More milestones ahead for Roethlisberger, whose two touchdown passes Sunday gave him 201 in his career, regular and post season. He will become the 25th quarterback in NFL history to throw for 29,000 yards and run for 1,000 yards when he adds 218 yards passing and 12 more rushing yards.