From Steelers.com this evening: 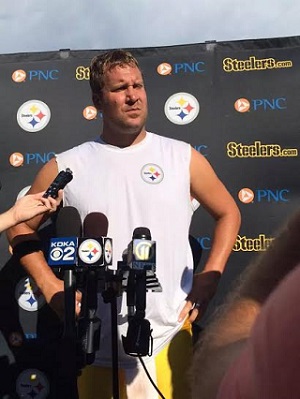 Re: Long camp and if it was good to work with the younger guys and fine-tune things:

It’s always good to get out here with new guys and work things out. We had to be here for an extra week, but it’s a good time. We get here and we get together.


Re: Aaron Rodgers throwing 19 times his last game and if you want a heavy workload:

I think it will be based on production and depends on how we play. I have no idea how long I am going to play. I will go until Coach Tomlin says I am done. I know that I will hope it’s productive however long that is.


Re: Appreciation for Rodgers:

I think he is one of the best in the game. I don’t think there is any argument about it. The way he goes about his business and the athlete that he is and player that he is, it’s undeniable.


Can the offense get better?

I think we can be better without the numbers being as good. If numbers are good and we are winning, then that’s a great thing. But we can be better. We can eliminate mistakes. We can be crisper. We can be more consistent. If we can do that then usually that should translate into winning football games.


So far how has the offense been this camp?

It’s been a good start to camp. But it’s just that. It’s just a start. We have to get out there and face those real bullets and get out there against other teams and their defenses, and play four quarters. It’s a long season. We will take it one game at a time.


How are Le’Veon Bell and Antonio Brown?

[They are] pretty darn good. Obviously I was blessed to play with a Hall of Famer [Jerome Bettis] but the way that those two guys go about their business and bust their butt and work, and then it carries over onto the field on Sunday. It’s hard to argue about those two.


Brown seemed frustrated with not getting the ball. Have you heard that from him before?

I hear it from everybody.


You can read more & watch video from his interview here.