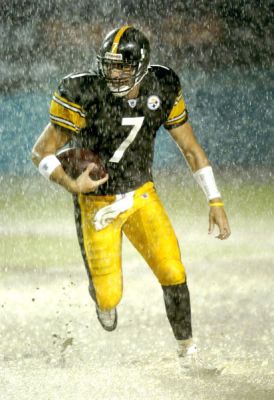 A variety of questions and topics arose during the event, with much of the focus on the record-breaking performances by the offense in 2014, and where Roethlisberger sees opportunities to grow even further.

There were also numerous opportunities for Roethlisberger and the fans to take a trip down memory lane and reflect on some of the amazing accomplishments as he heads into his twelfth season as a Steeler.

Speaking about his most memorable moment, it was hard for him to pin down just one.

“It’s hard to not say winning a Super Bowl and throwing that pass to Santonio Holmes in the back of the endzone because we feel it goes down as one of the greatest plays ever. It’s hard to beat that,” Roethlisberger said.

“Winning a Super Bowl in Detroit for Jerome Bettis and being there a couple weekends ago for Jerome at the Hall of Fame – those things are pretty special moments, as well.”

There was also a chance for Roethlisberger to think back to his first season in the black and gold and figure out what still stands out from that special rookie season.


“We got so far and went to the AFC Championship Game, and that was fun. But I think my favorite moment was my first actual start down in Miami during the hurricane and that crazy weather. I think everyone remembers it. Playing on that infield, it was a close game and I just remember how hard it was raining. The night before at the hotel there was no power so we were having our meetings with flashlights. I just think that was a memory I’ll never forget.”

The conversation wasn’t all football, though, as Roethlisberger addressed a fairly common question fans are usually interested in finding out the answer to – what would he be doing if he hadn’t made it in the NFL?

“I went to school for education so probably I’d be a teacher and a coach,” said Roethlisberger. “If I wasn’t doing that, I’d probably want to be like James Bond.”

And even though the preseason is only halfway over, Steelers Nation really only ever has one goal each season – to see their team bring home another Lombardi Trophy.

Roethlisberger addressed that very subject when a young member of Steelers Nation asked if he thought this was the season the Steelers capture their seventh title.

“I sure hope so,” Roethlisberger said with a smile. “We’re going to do everything we can and that’s why we’re here at camp every single day in the heat and the rain so that we can be the best that we can be. We want to win our seventh one for you fans so that’s our number one goal this year.”


You can join Steelers Nation Unite right here! It’s easy, it’s free – all you have to do is sign up! Don’t miss out on their next Weekly Huddle fan forum conference call!


*Thank you to Mike Hustava!!