“We’re trying to get him to the Pro Bowl. He’s deserved it for a long time. Heath is a weapon and we have to continue to use him out in the field and in the red zone. Like I’ve always said, he blocks like a lineman and catches like a receiver. If we keep utilizing him it will be big.” — Ben on the importance of Heath Miller.

Ben talked to the media before practice today about Sunday’s game against the Oakland Raiders, seeing Richard Seymour again, his thoughts on the no huddle, third down plays, kneel-down plays, and more… 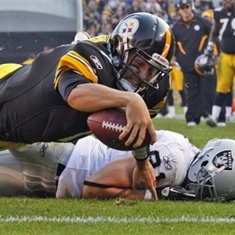 On the Raiders’ defense –

They’re a good defense, especially up front. They have a good front seven. Their defensive line gets after it. We just have to be prepared for anything in the secondary, from man coverage to zone.


How much do you remember from your last game in Oakland when you were battling concussion symptoms (October 29, 2006)?

I remember throwing like six or seven picks (he actually threw four) and it being a crazy, hostile place. That’s about it. And losing the game….It was so long ago, and I even forgot that I had a concussion the week before until you all just brought it up. Honestly, I think the interceptions kind of overshadowed everything.

Well, I got to see him at the Pro Bowl (laughs) so we were better off. It was more of a surprise, and I had said this afterwards, because he’s not a bad person. He and I know each other and we’ve talked. It was more of a shocking thing. I’ve seen him since and we’ve had laughs about it.

That’s Coach Haley’s call. He’s the one that calls all of the plays. There was no no-huddle. Our no-huddle is usually when we have three wide receivers on the field. They saw something and wanted to run the ball with multiple tight ends and keep you guys and the fans happy, I guess.

We’re making something happen it seems like. I just got done talking to Oakland and they asked how we can possess the ball for so long without being able to run the ball. It seems like it’s first and second down and nothing’s really happening and then it’s, “Hey, go make something happen on third down you guys.” We’ve been able to do that on third downs and make things happen, whether it’s the tight ends, running backs, receivers, or the line giving me time. I don’t know. I know we don’t want to do it all year, I’ll tell you that much.


On defenses rushing the quarterback on a kneel-down play –

It’s tough. I kind of see both sides of it. If I was at quarterback I wouldn’t be happy with it. If it was my defense, I’d say, “Way to go until the end of the game.” It’s hard. You never want to hurt anybody, especially this early in the season. It’s not like it’s a playoff game and something is going on. There are times when we take a knee at the end of halves and we’ll tell the defense that we’re taking a knee and everyone backs off. I think at this level that’s probably proper etiquette.

You can watch video of his interview here.