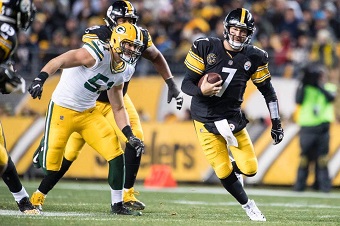 The Steelers’ offense has apparently turned a corner and found its stride, seemingly just in time.

Or, perhaps, because it was time.

“There’s always an urgency when you get to this time of year,” quarterback Ben Roethlisberger said. “There’s a chill in the air, it’s brisk out there. And you start getting that feeling that it’s winding down and you need to start playing your best football.”

It was unseasonably mild on the practice fields at the UPMC Rooney Sports Complex this afternoon, the chill Roethlisberger had referenced wasn’t evident. But the conditions were nonetheless appropriate for an offense that has warmed up considerably over the past two games.

After failing to hit the 30-point plateau in their first nine games, the Steelers have struck for 40 on Nov. 16 against Tennessee and 31 last Sunday night against Green Bay.

Their output against the Packers included season-high totals in first downs (28), third-down efficiency (8-for-13, 62 percent) and total net yards (462). The Steelers ran for over 100 yards (121) and threw for over 300 (341) in the same game for the first time this season. And they won the game by completing a four-play, 35-yard, 17-second drive that concluded with a 53-yard field goal on the final play of regulation.

The performance was even more memorable than the night they played the Titans.

“I don’t know if there was one particular thing,” Roethlisberger continued. “Being at home helps, obviously, you can communicate, different things, guys make plays. That’s kind of always what we’ve been saying, is how close we are, and I think that boils down to just making plays. And that’s from the line blocking, me making throws, guys making catches, runner’s running, just kind of putting it all together.

Roethlisberger and the Steelers will have a much better idea about that after Monday night’s visit to Cincinnati.

“This is a very good defense that’s never given up 30 points (this season) that knows us very well,” he said. “This is a big test for us.”

The Bengals’ season-high total for points allowed was surrendered in a 29-14 loss to the Steelers on Oct. 22 at Heinz Field.

Roethlisberger wants to see more of what the Steelers have been able to do with the ball of late in the rematch.

“Just keep doing what we’re doing,” he said. “When it’s not there, if someone’s not having a good day, someone picks it up for them. I might not make all the great throws but guys make great catches, just being able to pick up the slack for each other.

“Obviously, winning football games is our No. 1 goal. It helps when you’re scoring points and you’re connecting and things are going well.

“If we were to win this game, we can talk about it again.”


You can read more & watch video of Ben’s interview here.