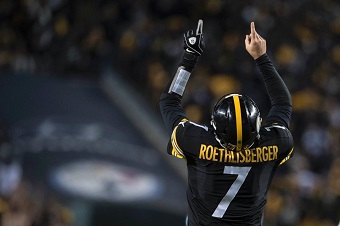 Coming off their second straight game with an offensive outburst, Steelers quarterback Ben Roethlisberger joined The Cook and Poni Show for The #1 Cochran Ben Roethlisberger Show to talk about how things started clicking for the team.

To hear Ben say is though, there’s still plenty of room for improvement.

“It felt good. We did some good things. It wasn’t perfect, maybe wasn’t even great at times, but it was good enough most of the time to get it done.”

The offense isn’t without its warts though as we saw dropped passes by Eli Rogers and Jesse James. Ben told us why he has the faith in those guys to go right back to them.

“When Eli dropped the one up the seam, I can remember it specifically, he kind of looked of looked at me, he was down, and I just gave him a look like, ‘Hey, it’s ok. You’ll make that. We’re fine. It’s not the end of the world.’

“Same thing with all those guys. I think they look at me after those plays and one bad thing about dropping it is letting the guys down, but I also feel sometimes they look at me like, ‘Uh-oh, we let Ben down. Is he gonna be upset?’ No, I think they know now it’s not the end of the world. I’ll let coaches get on you, but I’m not gonna get on you and scream at you because I’m coming right back to you as soon as I can.”

One guy you don’t often see drop balls for the Steelers is Antonio Brown, and he had a monster game against the Packers last week catching 10 passes for 169 yards and two touchdowns with two critical receptions on the game winning drive that got the team in field goal range for Chris Boswell.

Ben shared with us how much easier his life is out there because of Brown while also giving credit to Le’Veon Bell for making a huge impact in the passing game when the Packers doubled Brown.

“What a special football player,” Ben said about Brown. “I talked about that after the game a little about is how great he is. He makes plays that it’s so much fun to watch. I honestly thought Le’Veon was the MVP of the passing game and I know that sounds crazy to people, but I’m out there, I know what plays are being made and yes, AB is going to make the highlight plays, but there were a lot of plays in that game where the linebackers were getting depth and trying to get underneath some of those in-routes and stuff that we were trying to get AB the ball, and Le’Veon was getting out. The first thing he does on a lot of passes, he has to check protection. So he’s checking to see if his guy blitzes, and sometimes it’s multiple guys, he has to check two or three guys to see if anybody blitzes. When no one does, then he has to get out into his route, and when he gets out in his route, sometimes it’s man and he has to run a man beater, sometimes it’s zone and he has to find a spot, so for him, there’s a lot more involved than just kind of running out and turning around, and he had so many catches and touches, and we missed on a couple, but I really felt like his game in the pass game was exceptional.


The photo above is from Karl’s Top Picks. Definitely worth a few minutes of your time to go through his album!