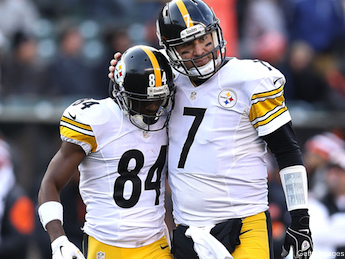 The Steelers will be without Antonio Brown on Monday when they take on the Houston Texans in a Christmas Day matchup, and Ben Roethlisberger knows it’s going to take more than one player to step in and fill the void.

“I will be honest, you can’t replace him with one man,” said Roethlisberger. “AB is not human. We will have multiple guys trying to fill that spot. We have guys that are excited, willing to try and fill those shoes. I think Justin (Hunter) is going to be one, Martavis (Bryant) will do some stuff, and JuJu (Smith-Schuster). Everyone really is going to have to step their game up, that includes me. I am going to have to be better.”

Roethlisberger said everyone stepped up big against the Patriots when Brown went down in the second quarter with a lower leg injury, and he is expecting more of the same this week.

“It’s tough. He is a special football player. He brings a lot of energy, a lot of smiles and laughs. We’ll just keep encouraging him to get back to us as soon as he can.”

While getting Brown rest is a key, there is still a lot at stake on Monday. A win, on Monday combined with a Jacksonville loss on Sunday, would give the Steelers a first-round playoff bye, something that can give everyone rest.

“It’s huge,” said Roethlisberger. “It always is for rest and it’s one less game you have to win in the playoffs.”

It’s going to be a challenge though. While the Texans might have a 4-10 record, they have a defense led by Jadeveon Clowney and Roethlisberger knows he is someone they have to be alert of all day.

“They are good,” said Roethlisberger. “Obviously when you’ve got Clowney running all over the field you are going to have to have eyes and understand where he is all of the time. He is a very, very special football player.”

And while looking out for Clowney is a key, Roethlisberger admits he doesn’t mind that he won’t see J.J. Watt on the field, and he said it with all due respect to Watt’s talent.

“He is a really good player,” said Roethlisberger. “One of the best. You always wat to play against the best. I am not that upset he isn’t out there.”


On how he feels about playing on Christmas:

“I would love being home with the kids, but I understand it’s the job and what is required of us. It’s tough. I am sure a lot of fans and people at home are excited we are playing. They get to watch it. Having little ones especially you want to be there on Christmas morning with them.”


On eight Steelers being selected to the Pro Bowl:

“It’s awesome. So happy for all the guys that made it, especially my linemen. I am always proud of them. And Boz (Chris Boswell), how deserving is he. I know there are always snubs, and everyone wants to talk about it and I hate talking about it, but I really felt Cam Heyward deserved it. I really thought he should have been in there.”


On looking back at the final play in the Patriots game:

“The great thing about that game is it wasn’t the last one of the year. It wasn’t a playoff game where we are having this final meeting and stuff. We get to move on and play another game this week against a really good opponent at their place. They have a really good defense especially.”


On the catch rule and Jesse James’ touchdown being overturned:

“The catch rule. I am not sure anybody fully understands when it is and when it isn’t. I felt like he caught it and was making a football move. That is up to the league office and their interpretation of rules and things like that. We move on and get ready for this week. That is all we can do.”


On what he would like to see change about the rule:

“That is way above my pay grade.”


On what it’s like when officials come to training camp and meet with the players about rule changes:


You can watch video from his Q&A here.