“I feel good. I really do. I know there has been so many crazy reports from the national people out there about my knees, how I feel. Those are just arthritis, that’s old age. My elbow, where I had surgery, feels really good. I am excited to see since where we are a little over a year out from surgery, how it’s going to feel as we move forward. I don’t feel like there has been any letdown in terms of how it feels. I think the doctors, rehab and everybody did a great job and I am very thankful to them for it.” — Ben. 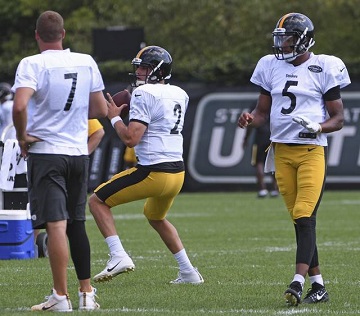 Ben Roethlisberger smiled during his weekly Zoom call with the media and admitted he doesn’t mind that he will get a breather this week.

Roethlisberger isn’t playing against the Cleveland Browns on Sunday, instead resting as the Steelers have already wrapped up a playoff spot and the AFC North Division title.

“I’m excited to get a little bit of rest this week.”

With Roethlisberger resting, Mason Rudolph will get the start on Sunday in Cleveland, seeing action for only the third time in 2020.

Rudolph previously played sparingly in the Week 6 game against Cleveland and in Week 9 at Dallas.

He has completed three of the four passes he attempted for nine yards.

Roethlisberger said he will be there in a support role for Rudolph, helping the third-year signal caller any way he can.

“I will be here for Mason, for Josh, whoever it may be – kind of like last year. That is the approach I want to take. I never want to step on toes, but I will be available for questions, to help. I have already talked to Mason about that. That is going to be my role this week is to really try and do everything I can to help them and to get them prepared for this game.”

Last year Rudolph started in a Week 11 matchup against the Browns on Thursday Night Football, struggling in a 21-7 loss where he threw four interceptions and was sacked four times. The game was also marred by an incident near the end that resulted in the ejection of multiple players, including Browns defensive lineman Myles Garrett.

“There are a couple of ways you can go about it [of how Rudolph can handle this game]. You can put it behind you and treat it like a typical quarterback that has to have a short memory. You just go out there and whatever happened last year, there is going to be a lot of hoopla about it, just put it out of our mind and go focus on this year, this game, this team.

“Or you can go take it as motivation that you want to go out and put it on them and win this football game. It’s really each man has to decide how he wants to approach it. I know from talking to Mason and knowing Mason he wants to go out and win this football game. He is going to do everything he can for this team. This is an awesome opportunity for him to get out and show what he can do.”

With Roethlisberger out last season due to his elbow injury, Rudolph played in 10 games, starting eight, and completed 176 of 283 passes for 1,765 yards, 13 touchdowns and nine interceptions.

While he has been limited in 2020, Roethlisberger said he has seen growth in him.

“I think he has gotten better every year in terms of understanding and knowing the offense, reads, throws. He’s physically gifted, we know that. He’s smart. We know he can make all of the throws and do things. Ways I have seen in game, during the TV timeout or whatever, that little huddle on the sideline, that is a time input is coming, from Randy, Coach Canada, Josh Dobbs. Mason has gotten to the point the last few weeks he is chiming in of thoughts and plays that ‘Hey Ben, what about this?’. I think that shows growth and maturity of a guy that understands the offense and what we are trying to do on a week to week basis. I think that has been really, really good.”

Roethlisberger also said Rudolph has the ability to adapt if need be.

“He knows the no huddle package. We’ve had it for a while. There are some changes we have made. He is aware of it. If we need to go to that mode, he doesn’t see it the same way I do, I don’t see it the same way he does. No quarterback sees the game the same as another quarterback. If it comes down to running the no huddle and him calling plays that he sees, it might look similar to what I do, but it might look completely different. He might have a group of plays he likes that are completely different than mine. I am sure if it comes to that, he knows it well enough he can make it happen.”

Ben’s Plan: With Roethlisberger sitting this week and getting a rest, one of the concerns is staying active and not getting rusty. He doesn’t think it will be a problem, as it’s just a week off, but he still plans on getting a little work in on the side in practice.

“In terms of on the field work this week, I may do some stuff on Friday. I can’t take reps from Mason, Josh, Duck, whoever is going to be taking the reps. It might be more during special teams, grabbing some guys and go through some stuff on another field, throw a little bit. To me this is going to be a really good mental and physical rest couple of days.

“I’ll grab some guys here and there without disrupting the flow of what is going on. What I don’t want to have happen is say guys let’s go over here and work on stuff for the playoffs, because we have a game and that would be unfair to Mason and guys who have to play this week.

“There is a fine line to walk, but you still have to stay sharp. I will stay mentally sharp by watching film, previous games of ours, and talking to Coach Canada.”