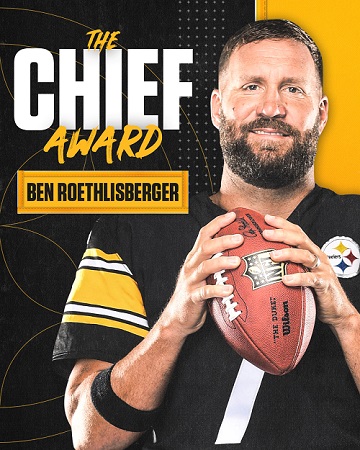 It’s the time of year when honors are handed out and that was the case when Ben Roethlisberger and Chase Claypool were both honored by the Pittsburgh Chapter of Pro Football Writers of America. Roethlisberger is the winner of ‘The Chief’ Award, while Claypool won the Joe Greene Great Performance Award, presented to the team’s top rookie.

‘The Chief’ Award, which was established in honor of Steelers’ founder, Arthur J. Rooney, Sr., is presented annually to a member of the Steelers’ organization that best exemplifies the spirit of cooperation with the media that he embodied. This is the second time Roethlisberger won the award, previously doing so in 2010.

In a year like no other working with the media, Roethlisberger is always willing to step up no matter what the situation. Whether it was during the week or after games, he has mastered being available via Zoom through good and bad. He has never shied away from talking and answers every question. He is so consistent that Wednesdays are now affectionately called ‘Bensday.’

And Roethlisberger has had a consistent message the entire season. It hasn’t been about statistics, but just about winning and getting back to where the Steelers are accustomed to being, the postseason.

“I would say the biggest stat is (the record),” said Roethlisberger earlier this season. “I don’t think anybody cares about their stats right now. No one is complaining. No one is coming to me. I am not exactly playing lights out. Their stats are directly reflective of the way I play. If I am not playing well, their stats aren’t going to be very good. Obviously, some of their numbers are down because I am not playing as well as I should be and need to be playing.”

Roethlisberger, who is in his 17th season and holds the Steelers record for most games played with 233, provided insight into multiple areas this season that he hadn’t previously. For starters, the potential Hall of Fame quarterback spent time in practice early in the season working on anything from the basics a rookie would focus on to the minute details that makes him the perfectionist he is.

“Going back and reviewing, I felt from Week 1 to Week 2, my pocket presence and awareness was better,” explained Roethlisberger early on. “I do feel I got a little lazy with my feet, which then, in turn, translated to a lazy arm. There were some throws that I kind of dropped my elbow. I don’t want to get too technical, but it became more of a three-quarter release instead of an over the top when I didn’t need to.

“There are obviously times you have to change your release point. There were too many throws, I felt looking back, that I just have to get my feet working better, and that will then translate, hopefully, to the rest of the body. Then I won’t be guiding some of the throws. That, to me, is the biggest thing I’m going to work on (in practice), even though it’s an off day. I’m going to really work on my feet and kind of starting it there with translating the rest of my body.”

Roethlisberger spent time on a Wednesday, normally a day off for him from throwing, working on his footwork, something he has spoken about often when it comes to what he works on but coming off missing the 2019 season and having surgery he knows every aspect has to be spot on.

“I’ve gotten away with it in the past being able to not necessarily be perfect from the ground up and just letting my arm kind of make up for a lot of things, a lot of imperfections if you talk to quarterback people,” said Roethlisberger. “Whether it’s the layoff, whether it’s the surgery, like I said, I feel great. I just need to get it in my mind that I can still make the throws when I’m not in the perfect position to make them.”

It hasn’t just been on ‘Bensday’ that Roethlisberger has opened himself up. Throughout his entire career Roethlisberger has kept his personal feelings, his emotions private. He has never been one to open up about them publicly, instead always keeping the focus on football.

Roethlisberger was the subject of a new documentary style mini-series, “Bigger Than Ben,” a four-part series by Mango Dragon Productions.

The series took you through the journey Roethlisberger went through during the 2019 season and his elbow injury and his offseason recovery, to come back in 2020 for training camp stronger than ever.

Heading into the 2019 season, Roethlisberger was the subject of criticism from many in the national media after the Steelers missed the playoffs. Some were relentless, bashing him for everything from his play to his leadership. For a player who takes a great deal of pride in being there for his teammates, he admitted that it did get to him.

“I’d lie if I said it didn’t bother me,” Roethlisberger shared in the series. “It’s definitely hurtful when your character, your integrity, things are challenged and talked about, especially when you know better.”