“I look at one game and one game only. I don’t think you can afford to look at where you sit and what other teams are doing. All we can do is control what we need to control.” — Ben, on whether he looks at the division race.

Ben was also asked about going up against the Lions defense, teammates Antonio Brown, Jerricho Cotchery and Jonathan Dwyer, and the Steelers red zone efficiency. 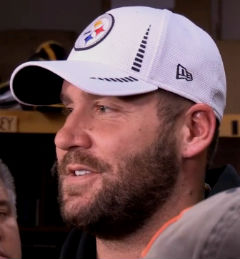 They are a very good defense. This morning, we reviewed the last game. We’ve done a little bit of a look ahead. But I don’t think it’s any secret what those guys have, especially on the defensive line.


What makes Antonio Brown so good?

A lot of things. He’s a hard worker. He is a guy that has great hands. He has great ability to adjust to any throw, bad throws. Did I say he has good hands? He has great hands. I’ve never seen anybody adjust to a ball the way he does. We’ve seen him catch it with his helmet and with his facemask. His ball awareness and skill is probably nothing like I’ve ever seen before.

We scored twice down there but we kicked field goals. That’s why I think I was so disappointed after the game. We won, and I am happy about that. But we should have been better. The first time we got back down there, I think it was after Ryan Clark’s interception. We really tried to pound, bring the extra tight end in, Mike Adams, and really tried to run the ball, because it worked the last time down there, when we grinded, picked up the extra yards and got the touchdown. That time it didn’t work. Their defensive line stopped us. I just think when we get down there we need to keep staying aggressive and not get too conservative and bring in the extra lineman and play that conservative role. We have great weapons. We can still spread them out and run the ball. So we will take a look at what we can continue to do to get better down there.


Has Jerricho Cotchery lobbied to get the ball more?

No. He’s a pro. When he comes and tells you that something is there or something is open, you believe him, because he’s not just coming to tell you those things because he wants the ball. He is a pro’s pro, and he works hard at what he does. You reward him. Just like on the touchdown he scored, he came and told us that he set up the play, the future play that we ended up scoring on. It worked great.


Ndamukong Suh has picked up fines in the past. Any concerns along those lines?

Try not to upset him. [Smiles]


Re: Jonathan Dwyer providing a spark:

It’s just that, he’s bringing a spark. It’s fun to see the energy he brings. I am not sure the exact number of carries he has every week but they seem to come at an opportune time. He gets the linemen fired up when he runs someone over.


Re: The rumor last Sunday:

To me, it’s about this game. Things like that take away from this team and what we are trying to do. It’s a non-issue with me. It’s silly. It’s not worth addressing. To me, the focus is on this week and the Detroit Lions.


You can check out more from Ben’s interview here.