What Ben had to say – 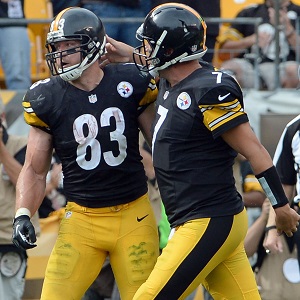 On Williams performance against the Patriots, which included rushing for 127 yards:

“I was obviously very happy with what he did, but we all knew what we were getting in DeAngelo. He’s a guy who puts the work in and is a great player. He’s a guy who won’t be put on a shelf once Le’Veon (Bell) comes back. He’s proven he can be a guy who can give Le’Veon breaks, and Le’Veon won’t be nervous to come out of the game because he’s got a guy who can step up behind him and do great things.”


On how Heyward-Bey and Wheaton did last game:

“I thought they did well. They both made some great plays. We are going to look back and wish we would have done some things differently. That’s myself included. Looking at it from my perspective, I thought they did a great job.”


On why Miller’s game is aging well:

“Because he’s aging well. He’s a guy that works and takes great pride in his craft. He makes sure he’s in shape and ready to go.”


On if working with Wallace for a few weeks before the regular season started helped, rather than Wallace having to step in fast like he did the last time there were injuries at center:

“That’s why I think a bigger deal was made of it to the outside world. Cody has been here and is part of the group. We’ve taken many snaps. I wasn’t worried about Cody and I think it showed. Cody played a great game.”

What did Ben have to say about Sunday’s game against the 49er’s?

You can watch & listen here.

What some defensive players had to say about Ben –

They practice against him daily, so they might know him better than any defensive players in the NFL. So, what do Ben Roethlisberger’s teammates think makes Ben, Ben. 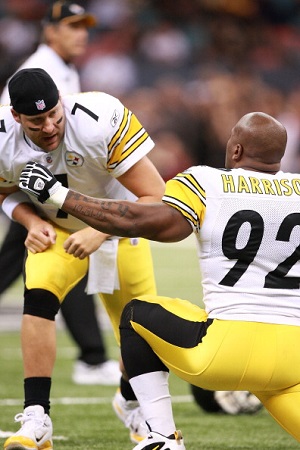 “His ability to put the ball anywhere and the ability to get away from would be pursuers and make tackles.”

“I think it’s his unique ability to make plays when a play breaks down. He is not really fast, but somehow he is able to allude defenders long enough to make plays with his feet. He is able to throw the deep ball. As a safety that is the worst thing, a quarterback that is able to extend the play and the ball still go deep. That is the toughest thing about playing Ben.”

“He demands a lot out of his guys. You can see his professionalism on the field as far as how he gets everybody lined up, his veteran savvy. There are things that you can’t coach that he does as far as his ability to extend a play. We always complain as a defense because he has so much time to do this and do that, and you get in the game and see him do it and it’s realistic. He is a great competitor, great athlete, and a great teammate as far as how he those guys prepare and be accountable to do their job. He is very emotional and passionate about what he does and you can see that in practice.”

“The guy is a workhorse. He is a playmaker, he is a leader. He is that guy you want to lead you. Ben is an awesome player. Our offense rallies around him, he makes them go. He is a huge leader for our team.”

“He can do everything. He can do the impossible. You will think he is sacked and he will come out throwing a deep ball to one of the receivers for a touchdown. To describe Ben in one word…great.”

*Thank you to Teresa Varley!