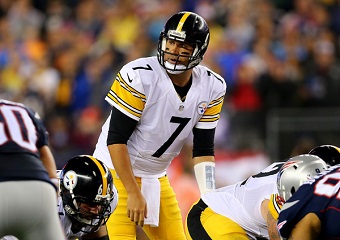 “It was a game where we did some good things on offense. There was some very encouraging things that we did and can do. We shot ourselves in the foot too much, whether it was with penalties, a bad play here or there or whatever it was.”

“Coach Haley wanted to kind of give them a bang, give them a changeup, some kind of a special trick kind of play if you will. Obviously, in hindsight, and he was the first one to say it probably wasn’t the right time for that play because we were driving and doing a lot of great thing…As soon as it didn’t work, he said, ‘you know what, I got a little too anxious to call that play.’”

“In a lot of games, the offensive coordinator to quarterback headset, it will go out, doesn’t matter if it’s at home, on the road, it just never fails, there’s almost always some kind of communication [issues]. But it’s real brief. It never lasts very long. I think the difference this time, and this is, like I said – there was no communication issues really between Coach Haley and myself – but what I was told and what Bruce [Gradkowski] told me when he listened, is that when we had the ball on offense, our coach-to-coach communication – so the guys up in the box to the guys on the sideline – were not only hearing themselves, but they were hearing the radio broadcast of the game. And from what I was told from Coach Haley it was only when we had the ball. When the Patriots had the ball there was no radio broadcast.

“It happens at a lot of stadiums. It happens at Heinz Field…That’s the first time that I had ever heard of anything happening when you hear a radio broadcast during a game, that’s new to me in hearing that. But like I said, it didn’t affect me at all, but it obviously affected the coaches, so whether that’s a coincidence it happened up there or what, I’m not really sure.”

“He’s a special player, I’ve said that many times. They were doing everything they could to double and grab and just try to frustrate AB and do whatever they could. To his credit, he just kept fighting and I thought he played a great game.”


You can listen to audio excerpts from Ben’s show,as well as the full show audio here.