First, and most importantly:


Prayers going out to Alex Smith, his family & his teammates! Wishing you a full & quick recovery! God bless! — Ben. 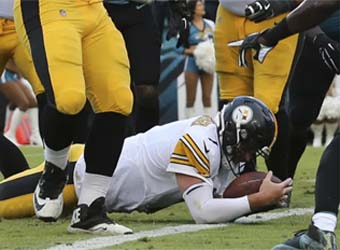 It doesn’t matter how you start, it’s how you finish.

And for the Steelers, they finished in dramatic fashion, coming from behind to defeat the Jacksonville Jaguars, 20-16, for their sixth straight win.


“You just grow when you are faced with adversity like this in a hostile environment and you are not playing great and you find ways to get it done. From that standpoint really excited. We have some lessons to learn. You tip your cap to that group, particularly their defense. We got a big play and that got us back into it. I also tip the cap to our defense. They were put in some tough situations. They were out there a lot of snaps. They didn’t blink. They held the fort until our offense got going. Then with No. 7 you have a chance.” — Coach Tomlin.

The Jaguars dominated in the first half, but while the defense bent, they didn’t break.

Jacksonville had 169 yards of total offense in the half, including 141 yards on the ground. They controlled the clock, with 22:15 time of possession to the Steelers 7:45. But at halftime all they had were three field goals, a credit to the defense.

The Steelers offense managed just 66 yards in the half, with only 13 on the ground. Ben Roethlisberger completed just 8 of 19 passes for 52 yards and two interceptions and a 10.1 rating.

But in the end, it was the Steelers who would win the stats battle.

The Steelers fought back from a 16-0 deficit, scoring 20 unanswered points, to pull out the win.

Roethlisberger more than rebounded, finishing the day completing 27 of 47 pass attempts for 314 yards and two touchdown passes. Antonio Brown had five catches for 117 yards, including a 78-yard touchdown, while JuJu Smith-Schuster had eight receptions for 104 yards.


“I think I actually hurt the team more most of the game. It’s really how you finish. So many guys stepped up today. Guys never quit. We fought until the end. We got down the field. Guys made plays.” — Ben.

Roethlisberger also engineered a game-winning touchdown drive, taking over with 1:42 to play in the game. He hit Smith-Schuster for 35 yards, and Brown for 25 to the two-yard line. And with just eight seconds on the clock he took it himself, extending every inch of his body for a one-yard touchdown.

The defense shut down the Jaguars in the second half, allowing just 38 yards rushing.

You can catch the highlight of Ben’s game-winning touchdown here, and his full interview here. 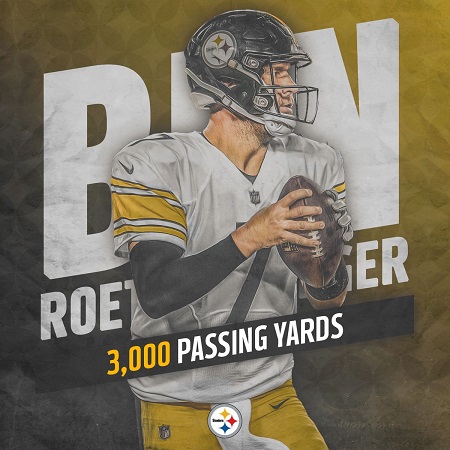 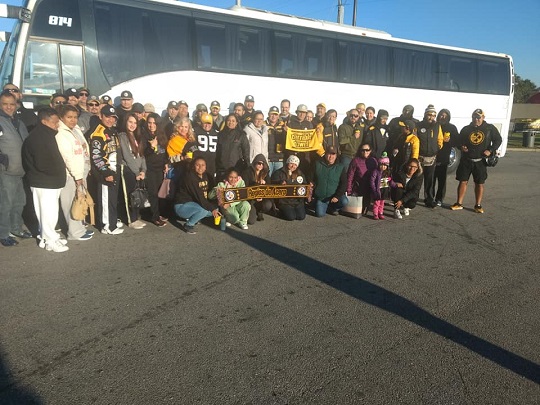 “52 people traveling by bus [from Mexico] for 29 hours to be at the game against Jaguars.” — Kike Hernandez. 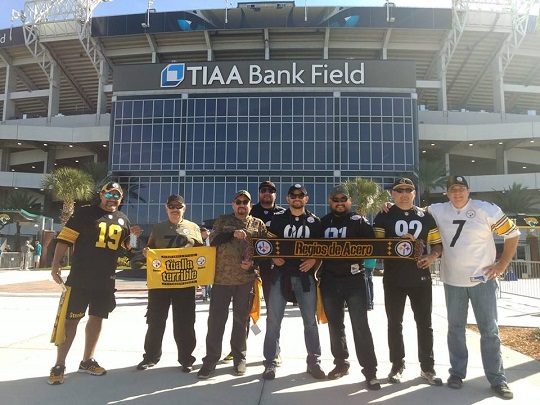 (“Already in the stadium and ready for the sixth consecutive. HERE WE GO!”) 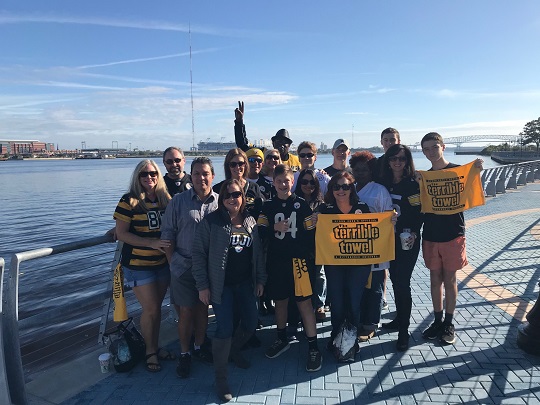 “The Charleston, SC contingent of Steeler Nation ready to board the water taxi to TIAA Bank Field in Jax! Go Steelers!” — Ron Manz.

Steeler Nation arrived… AND LEFT the stadium in Jacksonville STRONG!