“Guys stepped up and did some really great things, and I’m proud of that.” — Ben. 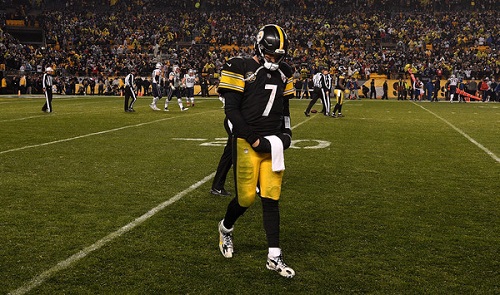 Ben completed 22 of 30 for 281 yards with two touchdowns and the one interception, the batted ball in the endzone to end the game, while Le’Veon Bell ran for 117 yards and a TD, as well as adding another 48 yards receiving.

The Steelers had to play most of the game without Antonio Brown, who left the field with an injured calf early in the game.


Worst part of the game:

They had a winning touchdown stolen away after Ben connected with Jesse James with 28 seconds left. But the call was overturned on review, when official Tony Corrente saying the ball did not survive the completion of the catch.


“What a roller coaster, to have that play and feel like you scored, and you’re excited for it and then and you have to come back in because it’s not a touchdown. It’s a game of emotion…We’re not going to second guess anyone. I threw the pick at the end of the game to lose it. I’m not into moral victories. We just lost a game and it doesn’t sit well, but the season is not over.” — Ben.

Best part of the game (because we want to end it with the best part):

Ryan Shazier watching from a suite. When he was shown on the scoreboard waving a Terrible Towel, the crowd went wild!! #SHALIEVE