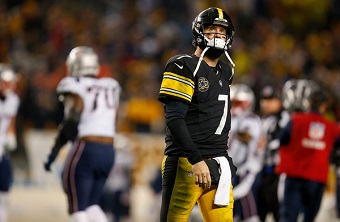 Ben walked us through the end of the game and how it all unfolded.

“I’m looking to the sideline to coach like, ‘Are we taking this timeout? What are we doing?’ Which is very typical. Obviously the only person who can communicate to me is Todd, and so I’m sure he’s asking Coach Tomlin and everybody.”

All of that led to the controversial overturn of the Jesse James touchdown and Ben told us what he was thinking as the refs looked at the play.

“I was on the sideline on a knee just getting my breath, taking it all in, praying. I had turned around and asked one of the TV people if it was good and they just nodded ‘yes’ that it was good…and then out of nowhere Coach Todd was like ‘Hey Ben, this might not be good, lets get a play ready to go.’ So I started walking back down a little bit towards where they were congregating and that’s when the official came out and said. it that it wasn’t good.”

So was it a catch?

“I think Jesse caught that ball.”

Now none of this would had happened if it weren’t for the ridiculous catch rule the league uses and Ben shared with us his thoughts on the ruling.

“Honestly it makes less sense to me,” Ben said after thinking about the play more. “I felt like he caught it. He brought it into his body and then reached out and then yeah, when he hit the ground it came loose, but I felt like the reach is credit of the football move…it’s a touchdown.”

Now, what happened on that play after that led to the game clinching interception for the Patriots?

“I’m yelling ‘clock-clock’…the line knows when they hear ‘clock’ you snap it and you just protect the inside.”

“At that moment, the only thing I can do is give a receiver a quick hand signal to run a quick route and try and hold the ball long enough because, like I said, the line is not blocking in protection, they’re basically just lining up. And in that moment as I’m thinking in my head ‘Do I spike it? Do I not?’ I went with, and I probably wish I would have listened to my gut now obviously in hindsight, I should have listened to that instead of listening to running a play and I juts tried to make a play to Eli. I don’t regret it, I just wish I would had made a better throw. I’ll take the blame for the interception at the end of the game.”


You can listen to more from Ben’s show here.