“We just like to stress people out early. All you guys and all our fans at home…and I hope the NFL gives TJ Watt half a sack.” — Ben.

From the NFL Media Research Department:
“Ben Roethlisberger completed his 57th game-winning drive (incl. playoffs) in the Week 18 OT victory over the Ravens, breaking a tie with Peyton Manning & Drew Brees for 2nd-most in the Super Bowl era. 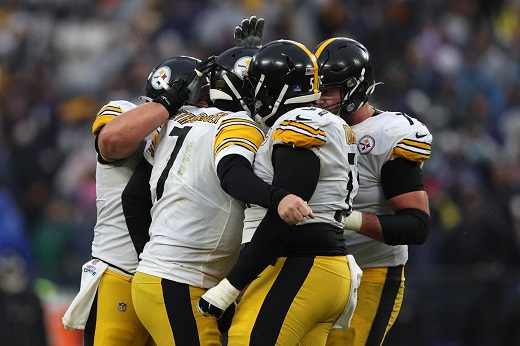 The Steelers playoff hopes are still alive after a 16-13 overtime win over the Baltimore Ravens at M&T Bank Stadium, coupled with the Jacksonville Jaguars defeating the Indianapolis Colts, 26-11.

The Steelers still need one more thing to happen to clinch one of the AFC’s final playoff spots. The Los Angeles Chargers-Las Vegas Raiders game on Sunday Night Football can’t end in a tie.

Quarterback Ben Roethlisberger led the Steelers on a fourth-quarter drive to take a 13-10 lead, when he hit Chase Claypool for a six-yard touchdown.

The defense was able to contain the Ravens, but a Justin Tucker 46-yard field goal tied the game, 13-13.

Roethlisberger and company got the ball back with 1:13 to play but came up one yard short on third-and-four, forcing a punt. The defense held, sending the game into overtime.

The Ravens won the overtime toss, but the defense was able to shut them down, giving Roethlisberger one final shot.

Roethlisberger led the offense down the field, setting up a Chris Boswell 36-yard field goal to win the game, 16-13.


“I’m so thankful for this rivalry. People always ask me where is my least favorite place to come and play? It’s always Baltimore. It’s because of how good the team is and it’s defense. And this place is always crazy loud. The fans are ruthless, and I mean that in a good way. So, it’s pretty special to get this win…it’s just good old fashioned football.” — Ben. 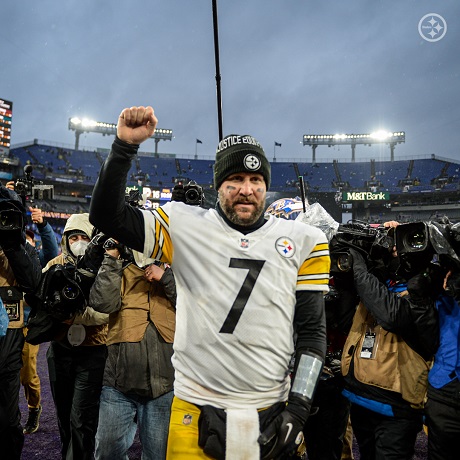 The Steelers needed a win over the Ravens to have a chance to qualify for the AFC playoffs, and as he had done so many times during his 18-season career, Roethlisberger delivered for his team in pursuit of victory.

Roethlisberger finished the game by completing 30-of-44 (68.2 percent) for 244 yards, with one touchdown, one interception, and a rating of 80.1, but those are simply statistics on a sheet of paper. The first half ended in a 3-3 tie, and the Steelers trailed, 10-6, going into the fourth quarter, but Roethlisberger took over from there.

He moved the offense 50 yards in 10 plays and got it into the end zone on a 6-yard pass to Chase Claypool, and then in overtime after a stop by the Steelers defense, Roethlisberger drove the offense 65 yards in 15 plays to set up Chris Boswell for the 36-yard field goal that gave the Steelers a 16-13 victory in overtime to end the regular season at 9-7-1.

“He made a couple plays against man coverage, I think, [in] critical situations that were key,” said Ravens Coach John Harbaugh about Roethlisberger. “Then when he made the last one, he found it against zone [coverage]. He just made some throws, and they made some catches in critical situations.”


And once more for the NFL officials in the back: