Big win for Big Ben and the Steelers!


“To get the ball tied with time [left] and two timeouts, you just have confidence. I told the guys ‘Let’s go, this is on us to win it’, can’t be any doubt. I want those guys to see the confidence from me. Everyone believed. It’s big when you all believe, and you buy into what we’re doing. I think we did a good job of that.” — Ben

From the AP‘s Will Graves post-game: 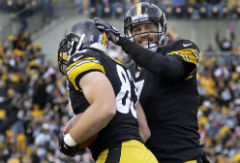 Shaun Suisham remains perfect. Now, his imperfect team is showing signs of pulling out of its massive early season hole.

Ben Roethlisberger completed 17 of 23 passes for 160 yards and a touchdown. He hit Antonio Brown for a pair of big gains on Pittsburgh’s final drive, putting Suisham well within range to win it. Running back Le’Veon Bell ran for a season-high 93 yards on 19 carries.

The Ravens trailed all day but finally ran the Steelers down when Flacco guided a 16-play, 73-yard drive that ended when the quarterback hit Clark in the back of the end zone to tie the game at 16 with 1:58 to go.

The Steelers nearly went back in front immediately when Emmanuel Sanders picked up the ensuing kickoff in the back of the end zone and raced down the right sideline all the way to the end zone. Officials, however, ruled he stepped out at the Pittsburgh 37.

In the end, it didn’t matter.

Roethlisberger led the Steelers 39 yards in seven plays, finding Brown for gains of 11 and 13 yards. Suisham remained perfect on the season, improving to 14 of 14 on the year when his kick went right down the middle.


You can read more from Mr. Graves here.

And you can also check out a few photos from the game here.