It’s another Warrior Wednesday, and this time we wanted to share the photo & story of one soldier who received a warm and unexpected welcome home last week when he returned from deployment, just in time for Thanksgiving!

PFC Steven Landa sent in his photo in September along with a message for Ben:


“Hello there! My name is Steven Landa, I am 19-years old and in the U.S. ARMY. I first saw Big Ben play when he took over for Tommy Maddox in 2004 – it was my first season watching football. I instantly became both a Steelers fan and a Big Ben fan.

I know he must be going through a lot right now with all the criticism but I truly believe Ben has more than what it takes to make it to the top 5 QB’s. Not a lot of fans might know this about Ben, but I know there is this poem called, ‘Don’t Quit’ that Ben reads before a game. That poem actually helped me not to give up during basic training.

I also don’t mind waking up at three in the morning to watch the Steelers play, win or lose! I have been a huge Steelers fan since ’04.” — PFC Steven Landa, Charlie Battery 1-43 ADA, U.S. Army.

We’ve been keeping up with Steven since that time, and this past weekend he sent in a new photo – this time of the special way he was greeted upon his return to the U.S. last week: 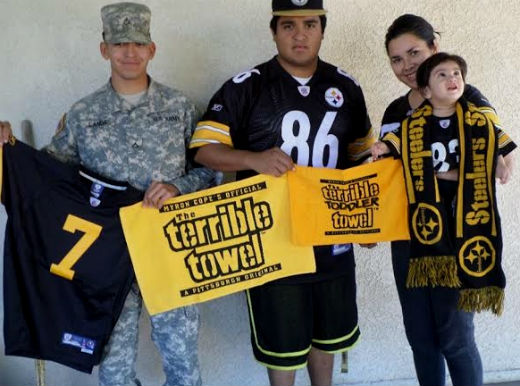 “I got back from a deployment and surprised my family for Thanksgiving. Not only that, but my brother Mike, his wife Briseida, and their son Maximiliano (who knew I was coming home), welcomed my return with their Steelers jerseys and gear on, ready to support me and our Steelers! They also surprised me with a new Big Ben jersey and a Terrible Towel! GO BIG BEN! GO STEELERS!” — Steven

Steven only has a few days to enjoy with his family before reporting to his duty station, but said it was “amazing to be back”.

Steven, we wish you all the best! Stay safe and God bless!