Training Camp: What you’ve been missing

Home/News/Training Camp: What you’ve been missing
Previous Next

Training Camp: What you’ve been missing

“Steelers have a great opening to their 2011 training camp”

From Christina Rivers, independent contract journalist for the Examiner: 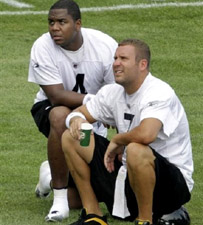 If you’ve never attended a Steelers training camp at Saint Vincent College, you’re missing out on one of the most exciting camps in team history.  The media frenzy on opening day was one thing, but the crowd of loyal fans standing along the sidelines, in the bleachers or across the lawn was impressive.  Moving-in day on Thursday saw players with items for their dormitory rooms, baggage and reporters nearly jumping at the chance for an interview.

The atmosphere, not unlike a family reunion, had many players greeting each other with hugs and handshakes.  Since Super Bowl XLV, most of the players haven’t seen each other except for those few who worked out together unofficially while the NFL lockout continued for nearly four months this year.

If there is any doubt that Ben Roethlisberger isn’t a leader and won’t be the starting quarterback this season, they should be put to rest.  Even though Roethlisberger was recently married, he didn’t look like he was on a honeymoon on the field. His passing was clean and sharp for the most part, and during an early scrimmage he showed he can still scramble gaining over 20 yards and a first down. Batch is still a great leader and isn’t shy about helping out those in camp. Byron Leftwich showed why he will most-likely be Roethlisberger’s backup this season….

“Unfortunately I got traded and myself and Ben parted ways, but we had a great deal of fun leading our team to the Super Bowl, just winning game after game, Monday night games, Sunday night games, Thursday night games, no matter where we played at, we were always ready to play for each other.” — Santonio Holmes, from an ESPN Radio New York interview about working with Ben.