Home/News/Willie Colon: “Team up to Tackle Lupus”
Previous Next

Willie Colon is the Honorary Chairman of this worthwhile event in honor of his mother, Jean Davis.

Now if walking is just not your style, you are invited to run or skate the Lupus Loop!

You can even bring your dog and enter him/her in the Dog Jog!

An awards presentation and lunch begin at 11:00 am.

The registration fee is $25.

The Dog Jog is only $5.00 and registered dogs will receive a gift and treats!

You can get a printable pre-registration form here.

Highlights from Ben’s meeting with the media… 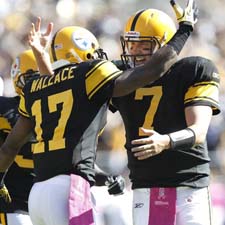 On whether he thought he would be playing this Sunday after his knee was injured during last weekend’s game:


On whether he would consider Mike Wallace a “one-trick pony” as he was described by Coach Tomlin:

“He’s two tricks now! I trust him to know what I’m going to do and I trust in what he’s going to do…every year, we’re adding a lot more for Mike, and he’s getting a lot better. He still has a lot of work to do. He’ll admit that. But he wants to get better at it and he works really hard at getting better at it. He’s able to do things in and out of breaks, just run deep. So he’s doing a lot of great things.”

“They’re built for that turf, and the crowd noise. When you have to use silent counts and stuff like that, they can get off the ball. They’re basically like linebackers who are big and strong. They’re so fast. It’s such a huge challenge for these guys [Marcus Gilbert and Jonathan Scott] this week.”


On whether he is practicing his “one step pass drops”:


On whether he could see himself playing in the league as long as Kerry Collins (17 years):


Mr. Wexell has more from Ben in his column here.

That Ben enters Week 3 against the Colts needing just four touchdown passes to join Terry Bradshaw as the second quarterback in Steelers history to reach 150 for his career? (CBSSports.com)