Today, Ben announced the second grant of the 2011 season from The Ben Roethlisberger Foundation at The Giving Back Fund. 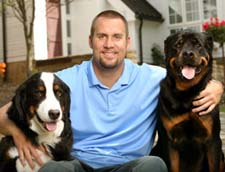 The foundation will be distributing a grant to the Lafayette Police Department, in Lafayette, IN, just outside of Indianapolis where the Steelers will play the Colts on Sunday.

The Lafayette Police Department will use the grant to increase the size of their existing K-9 corps, purchasing a dual purpose narcotic detection K-9 that is pre-trained with both patrol and tracking capabilities. This addition will bring their total number of K-9 units up to five.

Lafayette Police Department Chief Don Roush, acknowledging the 2011 police K-9 grant, stated: “The Ben Roethlisberger Foundation’s support of police K-9 programs around the country clearly demonstrates the Foundation’s commitment to law enforcement and our K-9 partners. I would like to thank the foundation for its leadership role and for partnering with the Lafayette Police Department to enhance our ability to provide the very best police K-9 services for the citizens of Lafayette.” 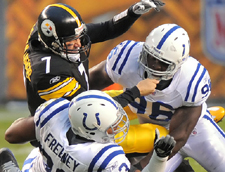 Pittsburgh visits Indianapolis this Sunday and among the factors the Colts will attempt to counteract will be a familiar foe who stands under center, or, perhaps, towers over it.

Ben Roethlisberger is in his eighth season, and his 6-5, 241-pound frame has become one of the signature presences in the NFL.

His physical nature and outstanding accomplishments cast a shadow in every game in which he participates, and Colts personnel are aware of the challenge that awaits.

“Ben makes so many plays with his feet. When things break down for them as an offense, he does a great job, probably as good as or better than anyone I’ve seen,” said [Dwight] Freeney. “I mean he’s up there, as far as making plays and buying time and being devastating to a defense. We understand a little bit of what they do and what he tries to do. We have to take 11 guys or maybe a couple of extra to hone things up.”

Many quarterbacks can attest that Freeney is a physical presence and a force with which to deal. Freeney puts Roethlisberger in a different category for quarterbacks.

“He’s a big boy. He’s strong, and he knows that,” said Freeney. “That’s why he does what he does. He has the ability to shake guys off, throw guys off, make unbelievable plays. When you’re playing Pittsburgh, that’s what you have to account for. Sometimes you don’t account for certain things or certain guys. Michael Vick, you have to account for the fact that when plays break down, he’s going to make plays with his feet. Ben is going to throw people off and try to continue to make plays. You can’t quit, you have to keep going.