Back in September of 2018, Seth Bayles story caught our attention! You can see why further down this post:

Well, Seth is back! He and his mother wanted to share some great news with Steeler Nation and all those who saw his story and continued to pray for him: 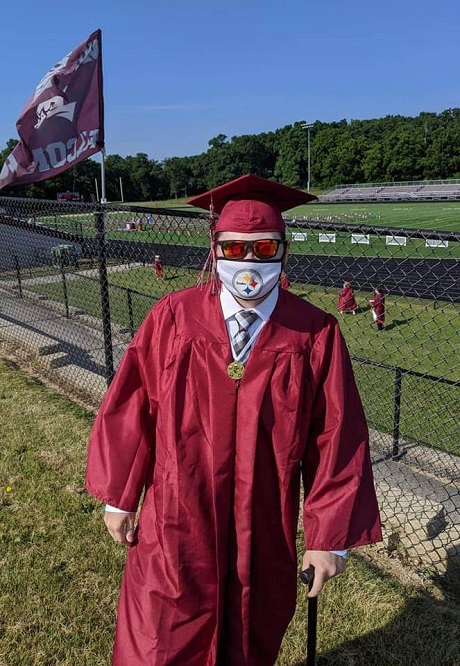 “Thought you and Ben may be interested to see Seth sporting his Steelers swag as he officially graduated from high school Sunday!

It’s been a long road for him to get to this point. We are praising God for all those that have invested their care, time love & support.

Seth is praying for and excited for the season! It always lifts his spirits. He and Dr Stulak and nurse Rosie talk often about this common bond.

We are grateful for you and Big Ben more than you know! Blessings to you and your families.

Love and respect,
Julie and Seth”

Congratulations Seth!! God bless you! Be bold, be courageous and always be your best!

After airing a story on ABC 6 News of a Mayo Clinic surgeon giving his signed Ben Roethlisberger football to a teenager with a rare, degenerative condition, Ben Roethlisberger reached out to tell us the signature was fake. What came next was remarkable!! — Hannah Tiede, ABC News- Rochester, Minnesota.

(From Hannah Tiede & ABC 6 News) — One of the best quarterbacks in the NFL is recognizing a Mayo Clinic surgeon and patient.

It’s a story you’ll only see on ABC 6 news…one that started with an incredible act of kindness.

“Seth has a very rare autoimmune disease that is killing all of his healthy cells and tissues,” said Julie Bayles. “Basically its progressive degenerative; it is choosing which organ system it wants to attack next.”

For the past 11 years, Julie has been taking her son, Seth Bayles, to Mayo Clinic for specialized treatment. It’s quite the trip, considering they live in Kenosha, Wisconsin.

“It’s worth the 600-mile drive,” said Julie. “We feel like we are the only patient they have at the time.”

Nothing could be truer after a complication with Seth’s feeding tube. It was at an emergency visit on August 8th, where Seth met Patrick Quandt.

“I had an immediate connection as soon as we walked in the room,” said Quandt, a Registered Nurse at Mayo Clinic.

“I showed him the tattoo on my arm,” said Quandt. “Immediately, knew that my good friend Doctor John Stulak would really appreciate the chance to meet Seth.”

“Steeler Nation is all about family and so when one member of the family is in the hospital, then all of the family members flock,” said Dr. Stulak, a Cardiac Surgeon at Mayo Clinic.

Dr. Stulak knew right away he wouldn’t be visiting Seth empty-handed. He gave Seth what he thought was a signed Ben Roethlisberger (A.K.A. “Big Ben”) football.

“Nine years I have had that football,” said Dr. Stulak. “It was a gift from my brother, George. I gave it to him [Seth] without asking him [George] and by the time I told George I gave away his gift, he had already seen the story on Facebook.”

The story also caught the attention of Roethlisberger’s social media & website manager. She showed our feature story to Roethlisberger, who confirmed it was not his signature. Cox reached out to an ABC 6 News reporter.

“I felt bad for George because he bought that as a gift for me,” said Dr. Stulak. “He is a big sports collector and I knew instantly he was going to be upset with himself because he prides himself on doing the research and looking at the letter of authenticity.”

However, the revelation set in motion a surprise.

On Friday, Julie (with help from Mayo Clinic staff) arranged to meet Dr. Stulak. She showed Seth, Quandt and Dr. Stulak a video message from Roethlisberger:

“Hey, Seth. Hey Doctor Stu. Ben Roethlisberger here, sitting in our practice locker room getting ready to go out for practice. I wanted to shoot you a quick note to say ‘Thank You for being Steelers fans’. I appreciate your guy’s support. I saw your video online. Doctor Stu, how you gave the football to Seth, I thought that was really, really cool. But something kind of caught me off guard; that the autograph wasn’t mine.

So I just wanted to send you a video just to let you know that I appreciate you guy’s support. And Seth why don’t you check with your mom? She might have something for you … and you too, Doc. And Doc, thanks for all you do. You’re a true hero. Seth, keep up the good fight brother. Pulling for you, praying for you and thanks for your support. Alright pal, talk to you later.”

The first was signed “Seth – You are the MAN!”

The second was signed “Dr. Stulak you are a real hero!”

“This is unbelievable,” said Seth. “It is just awesome! Yeah, I can’t begin to tell you how amazing and cool this is.”

“When it [the video] started playing, just to hear him say our names … that’s really something special,” said Dr. Stulak. “He [Roethlisberger] has brought us world championships, he brought us a lot of happiness to a very depressed area.”

Dr. Stulak still says Seth is the hero, not him.

“He is fighting a real fight. One for his life, one for his quality of life,” said Dr. Stulak. “But what he doesn’t realize is … through his battle, he inspires millions more than I could ever inspire.”

When asked what will happen if another Steelers fan visits the hospital, Dr. Stulak joked “I will be very conflicted whether or not to give him this ball. Maybe I’ll buy him a refrigerator magnet or something like that.”

Dr. Stulak, Julie and Seth want to extend a huge ‘Thank You’ to Roethlisberger and Cox.