Ben was selected as the AFC’s #2 quarterback behind the Patriots’ Tom Brady to play in the 2012 Pro Bowl!

The rosters were announced this evening at 7 p.m. on a special NFL Total Access “2012 Pro Bowl Selection Show” on NFL Network. 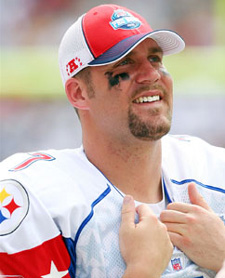 Ben has passed for 3,856 yards with 21 touchdowns and a quarterback rating of 91.5 rating so far this season!

Phillip Rivers is the #3 quarterback behind Tom Brady and Ben.

This is Ben’s second Pro Bowl selection. In 2008, he was a reserve quarterback along with the Colts’ Peyton Manning behind the Patriots’ Tom Brady, who was the No. 1 vote-getter. Ben became the back-up to Peyton Manning on the field when Tom Brady opted out.

Thank you fans!!! Your votes put him on that roster!


About Ben’s season, from Steelers.com:


You can read more about the Steelers Pro Bowl selections from Mr. Bouchette here.


Take a look back:

Watch an interview with Ben in Hawaii during the week of the 2008 Pro Bowl here.

Check out a few photos from that week in Hawaii here.