Post-game from the AP: 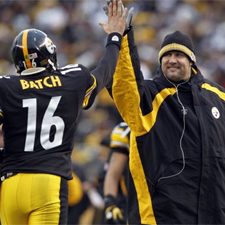 Charlie Batch played well enough on two good ankles to keep Ben Roethlisberger from having to play on a bad one.

The veteran backup quarterback played efficiently if not spectacularly in place of the injured Roethlisberger, passing for 208 yards as the Pittsburgh Steelers crushed lifeless St. Louis 27-0 on Saturday.

Rashard Mendenhall ran for 116 yards and a touchdown, and John Clay and Ike Redman also scored for the Steelers (11-4), who kept their hopes of an AFC North title alive even with Roethlisberger’s sprained left ankle forcing him to watch the game from the sideline as the team’s third quarterback.

The Steelers were never in any real danger as Mendenhall found plenty of room to maneuver against the NFL’s worst run defense, while Batch extended a couple of plays with his feet to keep drives alive.

The Steelers can win the AFC North next week with a win over Cleveland and a Cincinnati victory over Baltimore.

You can watch highlights from the Christmas Eve game here.


Wishing everyone a very Merry Christmas!