“This gift is a huge thank you to everything, on and off the field, that Miami University provided me. Attending Miami was one of the best decisions of my life and I am happy to play a small part in helping to rebuild this football program.” – Ben.

Miami University opened its indoor sports center the first week of February, but it will be officially unveiled to the public during a ribbon-cutting ceremony on April 25th.


“I want to thank Ben and Ashley for their support of Miami Athletics. This gift continues our vision to make a difference in the lives of our student-athletes and that includes winning MAC Championships. I am thankful that both Ben and Ashley share in that same vision.” – Miami Athletics Director David Sayler. 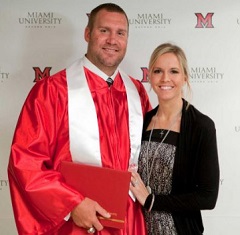 That season alone, he captured third-team All-America honors and was just the third player in Miami history to garner the Vern Smith Award as the Mid-American Conference Most Valuable Player.