Taking another look back…


“It’s a dream come true. I’ve always wanted to play in the NFL. Everything I get to do, meet all these coaches, see Al Davis, visit with Warren Moon, it’s a dream coming true. It’s hard to believe. I have to pinch myself and make sure it’s true.” – Ben, on both the experience and the opportunity to play in the NFL, March of 2004. 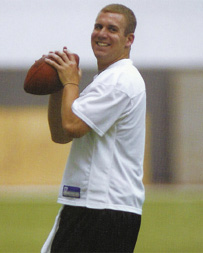